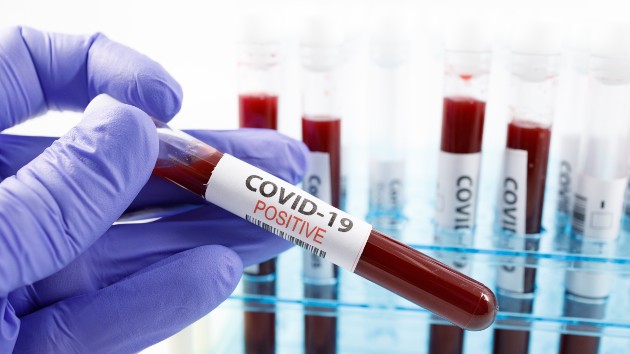 (NEW YORK) — A pandemic of the novel coronavirus has now infected more than 72.8 million people and killed over 1.6 million worldwide, according to real-time data compiled by the Center for Systems Science and Engineering at Johns Hopkins University.

Dec 15, 8:55 am
Nurse and single mom becomes first in New Jersey to get vaccine

Maritza Beniquez celebrated her birthday Tuesday by becoming the first person in New Jersey to receive a COVID-19 vaccine outside of a clinical trial.

Beniquez, a nurse at University Hospital in Newark who is a single mother and first-generation Puerto Rican, clasped her hands in prayer as she was administered the Pfizer/BioNTech vaccine on live television.

“Thank you, God!” she said. “I’m very excited. This moment means everything.”

Dec 15, 8:19 am
Fauci calls vaccine rollout ‘bittersweet,’ saying, ‘we still have a struggle ahead’

Dr. Anthony Fauci, the nation’s top infectious disease expert, said the rollout of COVID-19 vaccine doses across the country is “bittersweet” because “we still have a struggle ahead of us.”

“We are still in a terrible situation with the numbers … the deaths, the hospitalizations, the number of cases,” Fauci, director of the National Institute of Allergy and Infectious Diseases, told ABC News chief anchor George Stephanopoulos in an interview Tuesday on Good Morning America.

“And yet, we’re really now starting to see the light at the end of the tunnel that is going to ultimately get us through this. We know we’re going to be able to put this behind us,” he added. “But in the meantime, we still have a struggle ahead of us. So we’ve got to get people vaccinated as quickly and as expeditiously as we possibly can.”

Fauci said he believes 75% to 80% of the U.S. population will need to be vaccinated in order to achieve a “herd immunity” against the novel coronavirus. Until then, he said, “we have to adhere to the public health measures in order to blunt the acceleration of these terrible numbers that we hear everyday.”

Fauci, who is a key member of the current White House coronavirus task force, said the speed with which the Pfizer/BioNTech vaccine was developed and authorized “was not at all at the sacrifice of safety,” but rather is “the reflection of extraordinary advances in the science of vaccine platform technology.”

“People are understandably skeptical about the speed,” he added, “but we have to keep emphasizing, speed means the science was extraordinary that got us here.”

Fauci, who will stay on in his role and be a chief medical adviser on the coronavirus pandemic in President-elect Joe Biden’s incoming administration, said he believes both Biden and Vice President-elect Kamala Harris should get vaccinated as soon as possible.

“For security reasons, I really feel strongly that we should get them vaccinated as soon as we possibly can,” he said. “You want him fully protected as he enters into the presidency in January, so that would be my strong recommendation.”

When asked about whether he thinks President Donald Trump should be vaccinated, Fauci said he would recommend that Trump as well as Vice President Mike Pence get the shot.

“You still want to protect people who are, you know, very important to our country right now,” he said. “Even though the president himself was infected and he has likely antibodies that likely would be protective, we’re not sure how long that protection lasts. So to be doubly sure, I would recommend that he get vaccinated as well as the Vice President.”

Dec 15, 7:39 am
‘No side effects for me,’ says nurse who was among first Americans to get vaccine

The New York nurse who was among the first in the nation to receive a COVID-19 vaccine outside of a clinical trial said she feels “great” so far and has “no side effects.”

“No pain, no feeling of tiredness, no malaise,” she added. “No muscle aches. No side effects for me.”

Lindsay, a critical care nurse at Long Island Jewish Medical Center in New York City, was administered the Pfizer/BioNTech vaccine on live television Monday. She was the first person in the state of New York to get the shot outside of a clinical trial.

“I volunteered,” she said. “I am a leader in the organization, and so I think it as incredibly important for me to lead by example like I do everyday.”

Lindsay said she wanted “to send a message to people who might be on the fence that they should trust the science.” She said people who were initially hesitant about getting the vaccine, including some coworkers, have since reached out to tell her how much she inspired them.

“The vaccine is safe. What is not safe is contracting COVID-19,” she said. “So that was my reason, and I hope that just continues to resonate with people.”

Sweeping new restrictions came into force across South Africa on Tuesday morning, as the country looks to curb a sharp rise in COVID-19 infections ahead of the holidays.

All post-funeral gatherings are now prohibited nationwide. All other gatherings, including for religious purposes, are limited to a maximum of 100 people for indoor events and 250 people for outdoor events. The total number of people in a venue must not exceed 50% capacity.

A national curfew has been extended and will now be from 11 p.m. to 4 a.m. The curfew will remain in full effect over the holidays. Bars and restaurants across the country must close by 10 p.m. so their employees can return home before curfew.

Beaches along the country’s eastern coast and public parks in areas with the highest number of infections have been shuttered. Live music and performances have also been banned. Meanwhile, alcohol sales are now permitted only between Monday and Thursday at retail stores.

South Africa, which has so far confirmed more than 866,000 total cases of COVID-19, has seen a spike in infections since the beginning of December. The number of reported cases has been recently hovering around 8,000 per day, up from from around 3,000 per day in November.

“Given the rate at which new cases have grown over the last two weeks, there is every possibility that if we do not act urgently … the second wave will be more severe than the first wave,” South African President Cyril Ramaphosa said in a televised address Monday, while announcing the new rules.

London and other parts of England will move into the country’s highest tier of COVID-19 restrictions amid rising infections, U.K. Health Secretary Matt Hancock announced Monday.

The British capital, along with most of Essex and parts of Hertfordshire, will be moved from England’s “high alert” Tier 2 to the “very high” Tier 3 on Wednesday morning at 12 a.m.

“Over the last three weeks we’ve seen very sharp exponential rises in the virus across London, Kent, parts of Essex and Hertfordshire,” Hancock said while announcing the decision in Parliament.

Under the Tier 3 level of local restrictions, all hospitality venues including bars, cafes, pubs and restaurants must close except for takeout and delivery services. Sports fans also can’t attend events in stadiums. Indoor entertainment venues, such as bowling alleys, cinemas and theaters, must also remain shut. However, retail shops, gyms and hair salons can stay open.

Londoners, who are already unable to mix indoors with people from other households under Tier 2, will now not be able to meet in private gardens or at most outdoor venues except with those within their household or bubble. They may meet up to six people in other outdoor spaces such as beaches, parks, public gardens and sports facilities.

Hancock said a new variant of the novel coronavirus has been identified and “may be associated” with the rapid spread in southern England. London’s weekly case rate at 225 cases of COVID-19 per 100,000 people is currently the highest regional rate in the country.

“We do not know the extent to which this is because of the new variant, but no matter its cause, we have to take swift and decisive action, which unfortunately is absolutely essential to control this deadly disease while the vaccines roll out,” he said.

Although London Mayor Sadiq Khan said the decision was “incredibly disappointing for businesses who have suffered so much already,” he also acknowledged that “the virus is accelerating.”

“It would be such a tragedy to lose even more people to this disease when the vaccine is now being rolled out across our city,” Khan said in a statement Monday evening. “We know from bitter experience that when cases start to rise quickly, it’s much better to act early, rather than too late. This is how we can avoid even tougher restrictions, for longer, further down the road.”

There were 193,454 new cases of COVID-19 confirmed in the United States on Monday, according to a real-time count kept by Johns Hopkins University.

It’s the 42nd straight day that the U.S. has reported over 100,000 newly diagnosed infections. Monday’s tally is less than the country’s all-time high of 231,775 new cases confirmed on Dec. 11, according to Johns Hopkins data.

An additional 1,441 deaths from the disease were also registered nationwide on Monday, bringing the cumulative count past the 300,000 mark. Monday’s death toll is down from a peak of 3,300 fatalities on Dec. 11, according to Johns Hopkins data.

A total of 16,519,628 people in the U.S. have been diagnosed with COVID-19 since the pandemic began, and at least 300,482 of them have died, according to Johns Hopkins data. The cases include people from all 50 U.S. states, Washington, D.C., and other U.S. territories as well as repatriated citizens.