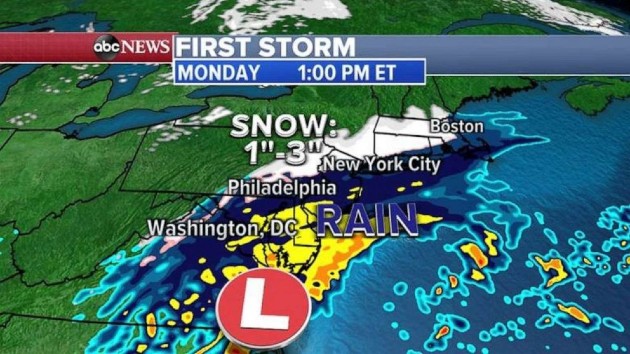 (NEW YORK) — Two storms are being tracked in the Northeast this week.

The first storm is moving from the southern Plains into the Northeast Monday morning with rain and snow.

Numerous accidents and thousands of customers have now been left without power in the southern Plains.

Up to 5 inches of snow has been reported in Tulsa, Oklahoma, making it the biggest snowstorm in the city in seven years.

In Oklahoma City, 3 to 4 inches of snow fell which broke a daily record.

Now, this same storm that hit Oklahoma and the southern Plains will move into the Northeast later Monday morning with rain for the I-95 corridor and 1 to 3 inches of snow for inland areas.

The first storm should be gone by the evening on Monday and attention turns to a second storm that will move into the Northeast and Mid-Atlantic on Wednesday afternoon and continue through Thursday morning.

This storm will be much stronger and it looks like there will be a lot more cold air involved which will help to make more snow for the I-95 corridor.

Here is the breakdown of what could happen: If it’s a weaker storm, the American model suggests that it tracks further away from the coast and that most areas will get snow with possibly 6 to 10 inches for New York City, maybe a foot for Philadelphia and several inches for Washington, D.C., while Boston will get maybe 1 to 3 inches.

If the storm is stronger, the European model suggests even more snow is possible for the Northeast but coastal and Mid-Atlantic areas could get more rain than snow.

Trump return to White House ‘would be a disaster’ for US intelligence: Former DHS whistleblower
Pfizer CEO says it’s possible to distribute both boosters and primary doses
The push for electric vehicles may be killing sedans for good: Experts
Iowa Republican Sen. Chuck Grassley, 88, running for reelection
US enters deferred prosecution agreement with detained Huawei executive Weng Manzhou
Harris interview with ‘The View’ delayed after co-hosts test positive for COVID-19