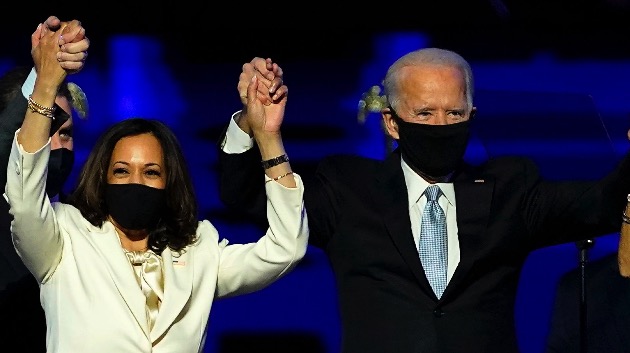 (WASHINGTON) — As President Donald Trump continues to spread misinformation about his November election defeat, a progressive-aligned group has launched a nonpartisan effort to target conservatives with an ad campaign urging them to see past the president’s false claims and graciously accept former Vice President Joe Biden’s victory.

The group has been airing 30-second advertisements on Fox News that prominently feature the words of Trump’s own Attorney General Bill Barr assuring that the election was clean — even as some of the network’s hosts continue to sow doubts about the election results.

Behind the ad campaign is the Progressive State Leaders Committee, an organization run by several Democratic-aligned figures, including Sean Rankin, the executive director of the Democratic Attorneys General Association. As a 501(c)(4) nonprofit organization, the committee is not required to disclosed itemized donors and expenditures, but disclosure reports from the Democratic Attorneys General Association show that the committee has given more than $833,000 to the association this year.

The ad campaign is part of the committee’s Voter Protection Program, which says on its webpage that it engages in strategies and outreach efforts “to protect the vote and make sure every vote is counted,” focusing on what it describes as the “unique tools available to state attorneys general, governors, secretaries of state and law enforcement officials.” The Voter Protection Program calls itself a nonpartisan effort, with an advisory board that includes both Democrats and Republicans.

The commercial kicks off with a narrator’s introduction of Barr as the president’s “loyal ally,” “America’s top prosecutor,” and a “champion of conservative values.” Then, the narrator quotes the attorney general’s recent comments in which Barr declared he “has not seen fraud on a scale that could have effected a different outcome.”

“America has spoken, the election was fair, the results accurate,” the ad concludes. “Republicans and Democrats were elected to offices up and down the ballot. It’s time to move forward, together.”

The $500,000 ad buy is scheduled to run through Dec. 11 only on Fox News, a spokesperson for the group told ABC News — a relatively significant post-election investment that aims to reach a broad audience across the country. Additionally, $350,000 worth of digital ads featuring the same clip have been running in the battleground states of Pennsylvania, Michigan, Wisconsin and Arizona, the spokesperson said.

The Voter Protection Program’s national director, Joanna Lydgate, told ABC News that Barr is “a trusted ally of the president and a trusted voice to his supporters,” and said that his words matter.

“It is long past time for President Trump to respect the will of the people so that we can move forward as a country,” Lydgate said. “Our national security and public health depend on a smooth transition of power.”

While the ad featuring Barr is the Voter Protection Program’s first national advertising campaign, the group has engaged in a similar campaigns on the state level, including in Michigan, where the president and his supporters have filed a cascade of lawsuits challenging the election result.

Barr has become a target of some on the president’s legal team in recent days, and Barr’s relationship with the president has outwardly appeared strained. The two reportedly held an “intense” meeting last week, and some close to Barr have suggested that he could leave office before the end of Trump’s term.