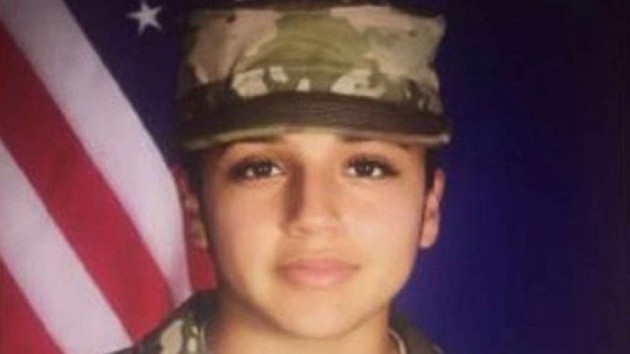 (WASHINGTON) — The Army has announced that 14 senior leaders and enlisted personnel at Fort Hood have been fired or suspended following an independent panel’s review of the command climate and culture at the base launched in the wake of the disappearance and killing of Spc. Vanessa Guillen.

The panel found that the Army’s sexual harassment prevention office at the post and Army-wide was “structurally flawed” and needed to be addressed. The Texas installation leads the Army in the number of violent crimes and cases of sexual assault and sexual harassment cases.

“I have determined that the issues at Fort Hood are directly related to leadership failures, leaders drive culture and are responsible for everything a unit does or does not happen to do,” Army Secretary Ryan McCarthy said at a Pentagon news conference Tuesday.

“I am gravely disappointed that leaders failed to effectively create a climate that treated all soldiers with dignity and respect,” he said, “and have failed to reinforce everyone’s obligation to prevent and properly respond to allegations of sexual harassment and sexual assault.

“Because of this — to restore trust and accountability — I have directed the relief and or suspension of commanders and other leaders from the Corps to the squad level.

Maj. Gen. Scott Efflandt, who was the top military commander at the post when Guillen was killed, was being relieved of duty, McCarthy said.

The entire command team for Guillen’s unit, the 3rd Armored Cavalry Regiment, was also relieved of duty. The command leadership of general officers who run the 1st Cavalry Division have also been suspended pending further results of a new investigation into the division’s command climate.

Lt. Gen. Pat White, the senior commander of III Corps, was not punished because he was deployed to Iraq as the senior American military commander when Guillen disappeared.

McCarthy had ordered the independent review of the base’s culture after Guillen’s family claimed that the 20-year-old soldier had been sexually harassed but was too afraid to step forward with her allegations because she feared retaliation.

The independent panel found that the Army’s Sexual Harassment/Assault Response and Prevention (SHARP) Program at Fort Hood was “structurally flawed” and said it “was ineffective, to the extent that there was a permissive environment for sexual assault and sexual harassment.”

“No Commanding General or subordinate echelon commander chose to intervene proactively and mitigate known risks of high crime, sexual assault and sexual harassment,” the panel wrote in the report’s executive summary. “The result was a pervasive lack of confidence in the SHARP Program and an unacceptable lack of knowledge of core SHARP components regarding reporting and certain victim services.

The report found that a lack of training, resourcing and staffing at the SHARP office led to “significant underreporting of sexual harassment and sexual assault” at the installation.

A separate investigation of Fort Hood’s leaders and the handling of the Guillen sexual harassment claim, headed by Gen. John Murray, is still underway and will be released at a later date. McCarthy announced that a new investigation would look into the policies and resources of the Army’s Criminal Investigative Command unit that carried out the investigation into her disappearance.

McCarthy also announced a new Army policy on missing soldiers. It does not assume that a soldier who does not report to duty is absent without leave and establishes a People First Task Force that will address the 70 recommendations from the Fort Hood Independent Review Committee.

Guillen’s family was notified of the actions being taken, said Gen. John McConville, the chief of staff of the Army, who then told reporters about his conversation with Guillen’s mother.

“I told her that we’re going to fix these issues that allowed them to happen,” he said Tuesday. “I told her we must and will provide a safe and secure environment for America’s sons and daughters that serve in the Army.”

Rodriguez was one of two board members who met individually with 647 soldiers at Fort Hood — 503 of them were women. What they found in those interviews with female soldiers was disturbing, they told reporters — there were significant numbers of unreported cases of sexual assault and sexual harassment.

“One of the really shocking elements of the interview period were the number of unreported sexual harassment and sexual assault incidents,” said Carrie Ricci, another board member. “Of the 503 women, we discovered 93 credible accounts of sexual assault. Of those, only 59 were reported. And we also found 217 unreported accounts of sexual harassment. That’s a really significant number. Of those, over half were reported.”

Ricci said the lack of reporting was due to a lack of confidence in the system and “absolutely affects the reporting of those incidents.”

“There was a fear of retaliation,” said Chris Swecker, who then described how soldiers lost faith in the process because it took so long for cases to work their way through the system.

In an interview with ABC News, the Army’s number two official said it was “invaluable” to have a civilian panel look at the command climate at the base.

Under Secretary of the Army James McPherson told ABC News that the report found soldiers have lost the trust and confidence of Fort Hood and Army leaders that their cases would be taken seriously without fear of retribution.

“That broke down,” said McPherson. “It’s now our job … to regain that trust, to rebuild that trust.”

McPherson said the report is being shared across the Army and general officers are being told that at their installations they should “take that hard look at yourself.”

“They discovered that in several instances the NCO put in charge of being the sexual assault response coordinator for the command was actually facing disciplinary action themselves. That’s beyond belief, but that’s what was happening at Fort Hood and we want to ensure that isn’t happening at other bases in the Army,” he added.

McPherson said that will likely change as “we will be taking a look at how do we professionalize the SHARP policies down to the squad level.”