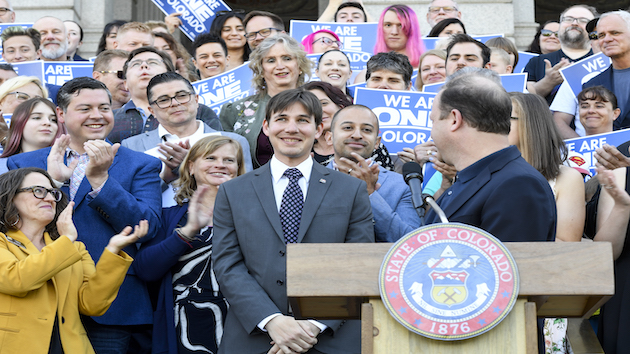 (DENVER) — The first gentleman of Colorado was resting at a hospital Monday after being rushed there Sunday night by his longtime partner, Gov. Jared Polis, when his symptoms from a bout with COVID-19 grew worse, the governor announced on Twitter.

Polis said on Twitter that he drove Reis to a hospital on Sunday after Reis began experiencing a “slighting worsening cough and shortness of breath on day eight after being diagnosed with COVID.”

“I took him to the hospital for review and treatment,” Polis said.

The governor added that he had not experienced similar symptoms.

Reis, an animal rights activist, appeared to be doing better on Monday, posting on Facebook stories about animal antics in 2020 from Reader’s Digest that he said “are sure to bring a smile to your face!”

In his Facebook post Sunday, Reis said his doctor suggested he go to the hospital as a precaution and that he was being closely monitored.

He used his ailment as an opportunity to tell others to take steps to avoid contracting the virus.

“In addition to your kind thoughts and prayers for me and everyone else afflicted by this horrible virus, please be extra careful to avoid getting it. Wearing a mask properly reduces your risk by half!” Reis wrote. “Also, make sure to avoid social gatherings (right now one in forty Coloradans is contagious with Coronavirus) and keep a distance from others.”

In a separate Facebook post, Polis Polis added that hundreds of people reached out through social media, email and text to wish Reis a speedy recovery.

“Reading the kind words and thoughts brings great joy to him as he recuperates,” Polis said. “He also wanted me to share that he hopes to be well enough to reply in a few days but for now he wants me to thank everyone and let everyone know that he feels the love.”