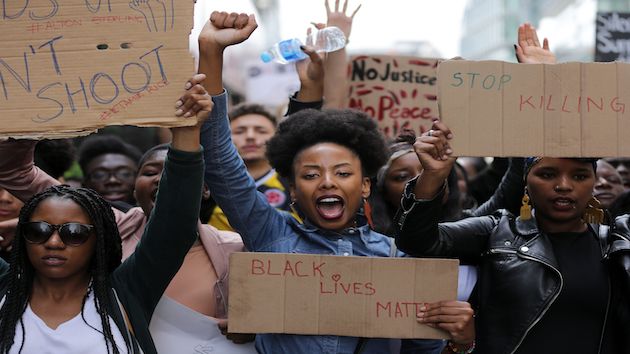 (NEW YORK) — Even as many Americans celebrated Joe Biden’s election win, some Black Americans and people of color knew work still had to be done.

“Americans feel like we won a war,” Toni Sanders, an activist based in Washington, D.C., told ABC News.

“We were in the negative and now we’re back at zero,” she said, referring to the transition of power from President Donald Trump to President-elect Biden.

Many Black Lives Matter activists say they fear America’s strides in fighting racism and social injustice could regress in this new administration.

Erika Wilson, an associate professor of law at the University of North Carolina at Chapel Hill, said Biden’s victory could be deceiving.

“Instead of saying, ‘I voted for Barack,’ it’ll be, ‘I voted for Biden and against Trump,’ as the new measuring stick for saying that one is not racist,” Wilson told ABC News. “Going back to normal for Black people looks a lot different than it might look like for other folks in the sense that they’re not reminded daily through the president’s tweets or comments of America’s very close connections to racism and white supremacy.”

She added, “‘Normal’ is a wealth and wage gap, health disparities, extrajudicial killings by police officers. That is the baseline of ‘normal’ for Black people in America.”

While public outrage and uproar overtook the country this summer after the police-involved killings of George Floyd and Breonna Taylor, America was also reckoning with “systemic racism.” These forms of racism are fixed and part of every institution, from law enforcement to education to housing.

Author Michael Eric Dyson delves into racial unrest and the killings of Taylor, Floyd and Ahmaud Arbery in his new book, “Long Time Coming: Reckoning with Race in America.”

“Hopefully, the trauma and tragedy of these deaths will inspire you to stay on the battlefield that much longer,” Dyson, a professor at Vanderbilt University, said.

Dyson said white nationalists may continue to intimidate minorities after Trump leaves office. But he still believes the country’s progress toward racial equality will continue under Biden and Vice President-elect Kamala Harris.

“This is an opportunity for us to push back and say no, we ain’t going back to the normal underground bigotry that was waiting for the opportunity to rise to the surface,” he argued.

Activists have called for dismantling systems built on the ideologies of racism and implicit bias, hoping that the same Americans marching on the front lines this summer for Black Lives Matter don’t stop fighting.

For many, the first step is urging non-people of color to challenge systems from within.

“You can’t just say, ‘I’m not racist.’ You have to be anti-racist, you have to fight against racism actively,” Sanders explained.

Added Dyson, “Now that you’re awake, stay awake. We cannot rest. If we rest, then we’ve lost what we’ve gained.”

“We have to continue to use the political energy that we mobilized to get Biden and Harris elected to push them to enact progressive policies that will not allow us to go back to normal, but that will hopefully undo some of the structural racism that creates these kinds of inequalities,” she said.

Dyson said the protests have to be broader to be effective.

“We’ve got to push white people to go into the streets as they did with us at the Black Lives Matter protests, but also come to corporate America, come to institutions of higher education, come to your jobs, your homes and do the hard but necessary work of challenging them from within,” Dyson said. “The war ain’t over.”