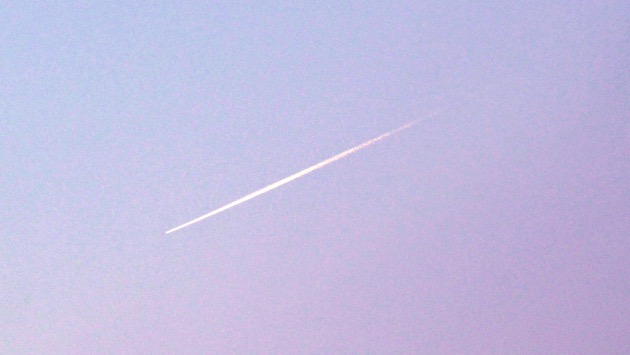 (NEW YORK) — Pieces of a meteor were seen falling from the sky across the East Coast of the United States and Canada in the middle of the day.

Residents in upstate New York began seeing flashes of light around noon Wednesday, and by the evening, the American Meteor Society(AMS) had received more than 150 reports in seven states. The event was mainly seen in New York and Ontario, but the organization also received reports of sightings in Maryland, Michigan, Ohio, Pennsylvania and Virginia.

Dozens of people in New York contacted local authorities and media Wednesday afternoon after hearing a “loud boom,” according to the AMS.

The sound occurs when a very bright fireball penetrates the stratosphere below an altitude of around 30 miles and explodes as a bolide — an extremely bright meteor.

While traveling westward at a speed of about 56,000 miles per hour, the meteor broke into pieces at an altitude of approximately 22 miles, which then produced the bright lights seen throughout the East Coast.

The fireball’s physical flight ended somewhere over Cayuga Lake in New York, the ground track of the event, which was computed by NASA, shows.

EarthCam tweeted a video of the meteor flashing through the Toronto skyline Wednesday afternoon, captured by a camera that faces the CN Tower.

Is it a bird? 🐦 Is it a plane? ✈️ Is it a meteor? ☄️
At the same moment in time, our cameras that face the CN tower in Toronto caught this object. We're not sure what it is or whether it is related. Follow the red circle and you tell us! Comment below! @TourCNTower pic.twitter.com/NCsY9DHFX2

Several thousand fireballs occur in the Earth’s atmosphere each day, but the majority of them occur over oceans and uninhabited regions, and many are masked by daylight, according to the AMS. In addition, fireballs that occur at night are often missed because no one is out to see them. The brighter the meteor, the rarer the event.

But multiple meteor sightings have occurred in the past month.

On Monday, a bright meteor was seen throughout Japan as it fell through the sky. Small fragments of the meteor may have reached the ground, experts said.

If you see this kind of event, please report it here: https://t.co/6WrVfuI28I pic.twitter.com/boY8oKyDvx

NASA also confirmed that a streak of blue light seen across central Texas near Killeen in mid-November was a meteor.

“A giant ball like a meteorite changed the rainbow spectrum of colors until it turned into a beautiful turquoise,” Texas resident Mary Ann Miron told ABC’s Houston station KTRK, describing the light as “huge” and colorful.

Did you see or hear the bright fireball that exploded over Texas into a brilliant shade of turquoise last night?! Follow the link here to file a report with @amsmeteors and send me your pics/videos if you've got them!