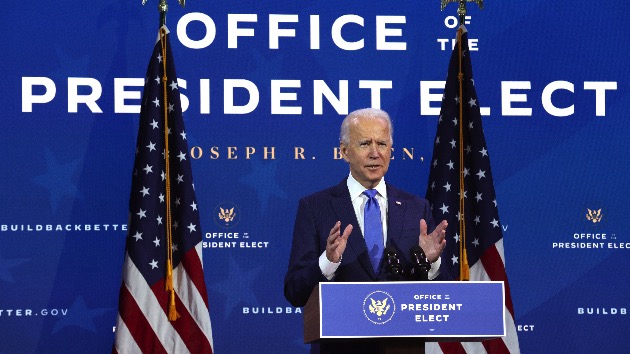 (WASHINGTON) — With President-elect Joe Biden preparing to unveil his picks to lead agencies on the front lines of the coronavirus fight, he’s eyeing Democratic governors for at least one key Cabinet position

Gov. Gina Raimondo of Rhode Island has emerged as a potential selection to lead the Department of Health and Human Services, sources tell ABC News. The Harvard, Oxford and Yale-educated official has long been rumored as someone who could enter a Biden administration, after she was vetted as a possible pick for vice president.

Raimondo, who was elected as Rhode Island’s first female governor in 2014, was seen ahead of the election as a possible nominee for Treasury or Commerce secretary, given her Wall Street background — which has also made her a target for progressives hoping to influence Biden’s incoming administration.

New Mexico Gov. Michelle Lujan Grisham, who was also vetted for vice president, is seen as another leading contender for HHS secretary, given her work leading a state during the pandemic, and serving as New Mexico’s health secretary earlier in her career.

Lujan Grisham has also been boosted by Latino Democrats and advocates who want Biden’s cabinet to reflect the diversity of the coalition that helped win the White House.

Biden’s pick for HHS secretary, and other coronavirus and health-related roles, could be unveiled as early as next week, sources tell ABC News.

A transition spokesman did not immediately respond to questions about Biden’s consideration of the governors or the timing of any announcements. Raimondo and Lujan Grisham’s offices did not respond to requests for comment on Wednesday.