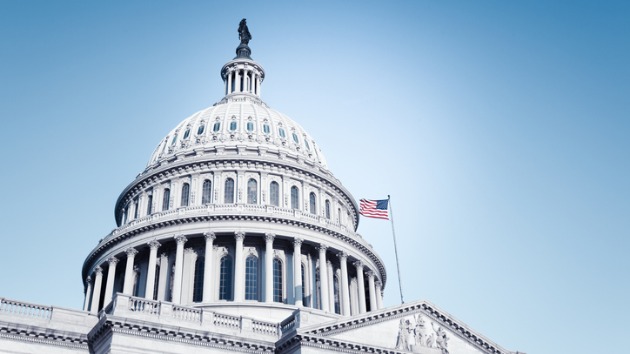 (WASHINGTON) — House Speaker Nancy Pelosi and Senate Minority Leader Chuck Schumer said Wednesday they are backing a new $908 billion pandemic relief bill introduced this week by a bipartisan group of Senate and House lawmakers in a sign of movement in a stalemate that has dogged Congress for months.

“While we made a new offer to Leader McConnell and Leader McCarthy on Monday, in the spirit of compromise we believe the bipartisan framework introduced by senators yesterday should be used as the basis for immediate bipartisan, bicameral negotiations,” Pelosi and Schumer said in a joint statement referring to their counterparts, Senate Majority Leader Mitch McConnell and House Minority Leader Kevin McCarthy.

“Of course, we and others will offer improvements, but the need to act is immediate and we believe that with good-faith negotiations we could come to an agreement,” they added. “In light of the urgency of meeting the needs of the American people and the hope that the vaccine presents, it’s time for Leader McConnell to sit down with Democrats to finally begin a true, bipartisan effort to meet the needs of the country.”

Their move comes just days before lawmakers are set to break for the holidays and after President-elect Joe Biden called on Congress to pass “immediate relief.”

The bipartisan proposal – at roughly $908 billion – is still almost a trillion dollars less than what Pelosi and Democrats had been calling for, and more than what Republican leaders have said they’re willing to sign off on.

The framework of the bipartisan relief bill includes $288 billion in small business aid, $160 billion in state and local government relief, and $180 billion to fund a $300 per week supplemental unemployment benefit through March.

The proposal does not include another direct payment to most Americans. It also would offer temporary federal protection from coronavirus-related lawsuits, even though Democrats largely oppose a broad liability shield.

It is unclear when the proposal will be ready for a vote on the House or Senate floor, or if Senate Majority Leader Mitch McConnell would even commit to calling it up for a vote.

“We just don’t have time to waste time,” McConnell told reporters Tuesday in response to the bipartisan proposal.

Sen. Mitt Romney, R-Utah, told reporters that the bipartisan group would meet virtually later Wednesday to continue to flesh out details of the compromise bill. Romney said the group is “keenly aware” of the limited time they have to get this legislation considered and noted that he and other members intend to stay in town to work through the weekend and be available for negotiations. Romney indicated more members have joined the group but declined to say who those members were.

This latest development from Pelosi and Schumer comes as the top House Democrat Steny Hoyer said Wednesday that he wants the chamber to finish its legislative work for the year by next Friday so that members have enough time to get home and quarantine ahead of the Christmas holiday, as the coronavirus pandemic continues to ravage the country.

“I want to send members home, if possible, no later than the 11th,” the Maryland Democrat told reporters Wednesday. “The reason for that is if need be, they’ll get that time to quarantine before Christmas and to reintegrate with their families if they need to quarantine for any reason.”

But Congress has a hefty to-do list before both chambers head home for the rest of the year, including approving a must-pass spending bill before a shutdown deadline of next Friday, passing a defense policy bill that the president has threatened to veto, and providing additional coronavirus relief that would assist ailing Americans and boost a crippled economy.

The No. 2 House Democrat said he is actively in discussions with McConnell, who Hoyer said has a mutual understanding that coronavirus-related relief must be passed before the holidays.

Hoyer said he hopes to reach a final agreement on a spending bill that could include additional coronavirus relief by the weekend, setting it up for votes on the floor by Wednesday and Thursday of next week.

“I know that sounds very optimistic,” Hoyer said, adding that he does not want to keep members past next week.

“There’s no magic in another week and [McConnell] agreed to that,” Hoyer said.

Democratic and Republican leaders had previously shot down the idea of combining the massive omnibus spending bill with any sort of coronavirus relief – saying the two issues need to be dealt with separately – but as the pandemic rages on with stark numbers of those infected and dying, and millions of people without employment and economic relief, this could be lawmakers’ last chance at getting legislation that addresses both spending matters across the finish line before the end of the year.

While Hoyer acknowledged that both Republican and Democratic leaders want to pass coronavirus relief before they go home, he admitted that there’s no agreement yet on what exactly they will pass.

The back and forth comes amid concerns about the toll of the coronavirus on the U.S. economy as crucial pandemic relief programs are due to shut down by the end of the year.

Pandemic Emergency Unemployment Compensation, which provides an additional 13 weeks of unemployment insurance and the Pandemic Unemployment Assistance Program, which aids self-employed or part-time workers, are set to expire Dec. 31.

The nationwide eviction moratorium will expire at the end of the year, as well as the student loan forbearance program, which President Donald Trump implemented by executive order.

The Paycheck Protection Program to assist small business owners stopped taking applications in August. And the boosted $600 in federal unemployment insurance ran out in late July.

McConnell has put forth his own proposal that addresses small business loans, education and Covid-19 vaccine distribution. It also protects businesses from virus-related lawsuits.

“The president will sign the McConnell proposal he put forward yesterday, and we look forward to making progress on that,” Mnuchin said.