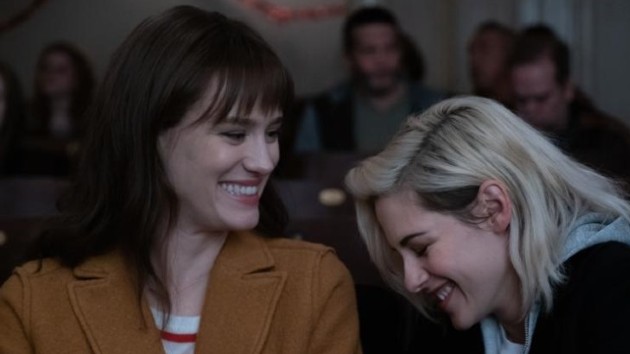 (NEW YORK) — The LGBTQ-themed romantic comedy Happiest Season scored the biggest audience for a Hulu original film’s opening weekend, and Variety reports the film also spiked subscriptions for the service more than any other feature title.

In the movie that debuted on November 25, Kristen Stewart plays a young woman who plans to propose to her girlfriend at her parents’ home over the holidays — only to learn that her partner, played by Mackenzie Davis, never told them she’s gay.

Actress and Happiest Season writer-director Clea DuVall and her partner, Mary Holland, wrote the film.  DuVall tells ABC Audio she felt the pressure to get it right.

“Yeah, I was so excited by the idea of getting to tell a big, bright, warm holiday story with a gay couple at the center of it, but yeah, it was intimidating. Because you want to get it right and you want to you know…hopefully create a movie that does well enough to that makes people see that content like this is something that audiences really want,” says DuVall.

Woman who made Bernie Sanders’ viral inauguration mittens says they’re not for sale
“If” Chris Evans returns as Captain America, “I’d be very happy with that” says Anthony Mackie
“I was just trying to keep warm!” Bernie Sanders laughs on ‘Late Night’ about his meme-ready picture
‘Game of Thrones’ prequel, ‘Tales of Dunk and Egg’, in the works at HBO
For GOP firebrand Rep. Lauren Boebert, anger and suspicion linger after Capitol riot
COVID-19 delays strike again: ‘No Time to Die’, ‘Morbius’, and ‘Ghostbusters: Afterlife’ all bumped again