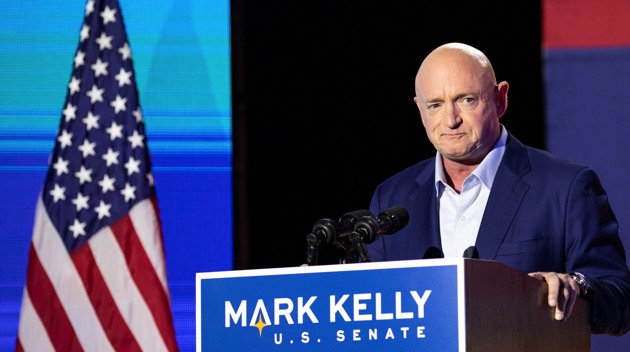 (WASHINGTON) — Former astronaut Mark Kelly is set to be sworn in as Arizona’s second Democratic senator Wednesday, shaving the Republican’s majority by one vote for the final weeks of the lame-duck session and marking the first time the state has had two Democrats in the Senate in 67 years.

Kelly defeated GOP Sen. Martha McSally by more the 78,000 votes in a special election to serve out the remainder of the late Sen. John McCain’s term which runs until Jan. 2023. (Sally was appointed to the seat in 2018 after Sen. John Kyl, also appointed by Republican Gov. Doug Ducey to fill the post, resigned.)

A former Navy captain and retired astronaut, Kelly became a strong advocate for gun control in the aftermath of a failed assassination attempt on his wife, former Rep. Gabby Giffords. He is one of two Democrats to flip Senate seats this year, joining Gov. John Hickenlooper who beat the Republican incumbent in Colorado, but has the unique position of being sworn in ahead of the new Congress in January since he won a special election.

The afternoon ceremony on Capitol Hill will narrow the Senate GOP’s majority from 53-47 to 52 Republican seats to the Democrats’ 48 at a time when the balance of power — and the promise of President-elect Joe Biden passing big ticket legislation he’s hoping for — hangs on two runoff elections in Georgia.

If Democrats win both races, the Senate would be split 50-50, and incoming Vice President-elect Kamala Harris would cast tie-breaking votes in the upper chamber.

Kelly will be sworn in on the Senate floor on Wednesday afternoon. He’s expected to be escorted to the dais by fellow Arizona Democrat Sen. Kyrsten Sinema where Vice President Mike Pence, as Senate president, is expected to swear Kelly in. Former Rep. Gabby Giffords, Kelly’s wife, is expected to attend. After the official swearing-in, Kelly will go to the Old Senate Chamber for a reenactment photo op.

Ahead of the ceremony, Kelly and his family paid their respects to McCain at the U.S. Naval Academy Cemetery in Annapolis, Maryland, on Tuesday — a stark contrast from the attacks of the late senator President Donald Trump has dished out since before taking office.

“Senator McCain has been a hero of mine since I was a young pilot. He left a legacy of service to Arizona and country that can’t be matched, but that we should all strive towards,” he posted to social media.

This morning my family paid our respects to Senator John McCain as I prepare to be sworn in tomorrow. Senator McCain has been a hero of mine since I was a young pilot. He left a legacy of service to Arizona and country that can’t be matched, but that we should all strive towards. pic.twitter.com/CSkhVXPmfW

After Trump’s attacks, Kelly has come to McCain’s defense.

The president’s continued dishonoring of Senator McCain's memory is disgraceful — it shouldn’t be hard for an Arizona senator to say that. Those who serve understand the gravity and risk of going to war and don’t take it lightly.

He pitched himself as an independent-minded candidate, who would work across the aisle in the Senate to get things done for Arizonans, and also campaigned on a stronger response to the coronavirus pandemic as Trump and allies like McSally downplayed its impact.

Against the wishes of the president, Ducey signed off on the certification of the state’s vote on Monday, telling reporters it will ensure Kelly is sworn into office “as swiftly as possible,” and despite Trump’s unsubstantiated claims of voter fraud in Arizona, McSally conceded to Kelly on Nov. 13.

It marks a new milestone in an already impressive career.

He served as a naval aviator and flew on dozens of missions, including some during Operation Desert Storm, and in 1996 he and his twin brother Scott were selected to be NASA shuttle pilots. During his five years with the agency, Kelly was a part of four missions to the International Space Station and totaled over 54 combined days in space.

Kelly retired from NASA shortly after Giffords was shot and the couple created a nonprofit gun control group, Americans for Responsible Solutions, which pushed states and congress for more common sense gun laws.