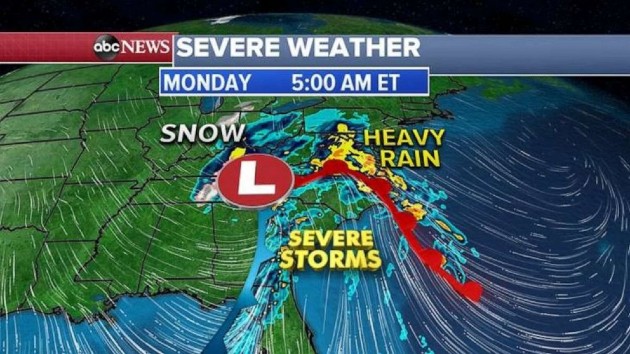 (NEW YORK) — A major storm system moved through the South over the weekend and into the early Monday morning hours and produced a possible tornado near Tallahassee, Florida, with reports of some damage.

More than a half a foot of rain fell in eastern Texas producing flash flooding in the Houston metro area.

On Monday morning, the center of the storm system is moving through the southern Appalachian mountains and spreading heavy rain into the Mid-Atlantic with thunderstorms, damaging winds and even a tornado threat for the Southeast.

Later Monday morning and into the afternoon hours, thunderstorms could become severe with damaging winds and a threat for tornadoes from North Carolina to central New Jersey and eastern Pennsylvania, including Philadelphia and just east of Washington, D.C.

Further north, from New York City to Boston and New England, gusty winds 40 to 60 mph are possible along with heavy rain which could produce damage.

On the back side of this large storm system, it is turning much colder with snow and the heaviest snow will be from Ohio into western Pennsylvania and New York where locally a foot of snow is possible.

Some of the snow will work its way down to the mountains of North Carolina where more than a half a foot of snow is possible and a Winter Storm Warning has been issued from western New York to North Carolina.