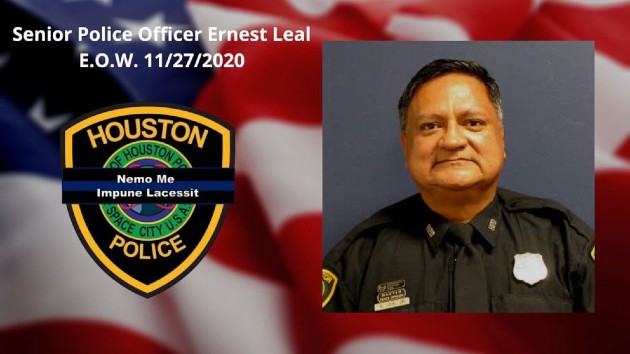 (HOUSTON) — Wearing black bands on their badges, some with tears rolling down their cheeks, hundreds of Houston police officers saluted the first member of the department to die from COVID-19 as his body was escorted from a hospital to a funeral home Sunday morning.

Around 10 a.m., Leal’s body, draped in an American flag, was wheeled out of the hospital on a gurney between two long flanks of officers saluting as he was placed in a black hearse. Police on motorcycles with lights and sirens on escorted the hearse to a nearby funeral home, followed by a procession of police vehicles and private cars.

Once at the funeral home, officers again formed two flanks and saluted Leal as his body was wheeled inside.

“We have truly lost a man who defines what it means to be a public servant,” Acevedo said in a statement.

The coronavirus has killed more than 266,000 people in the United States and has infected more than 13 million, according to the Johns Hopkins University Coronavirus Resource Center.

“I ask all Houstonians to pray for the families of Officer Ernest Leal and Joel Cirilo,” Sylvester said in a statement. “In their own way, they contributed to our city and made life better for all of us. I am grateful for their dedication and service to the City of Houston.”

Leal was a 36-year veteran of the Houston Police Department, Acevedo said. Leal began his law enforcement career in 1984 working in the county jail before transferring in 1989 to the department’s North Patrol Division, where he served until his death.

Doug Griffith, vice president of the Houston Police Officers’ Union, said Leal was such a beloved figure in the community he patrolled that residents showed up outside the hospital when they heard he was sick and held signs reading, “We Love You Officer Leal.”

“Everyone out there said just how much he was a go-getter,” Griffith told ABC’s Houston station KTRK-TV. “He would always be on the scene, you know. He is always out there to help out and lend a helping hand and serve the community. It’s an honor to have known him and his lovely wife, and we just want to keep them in our prayers right now.”

Acevedo said Leal is survived by his wife, Dee, and three children.

The chief said Leal was the fifth Houston police officer to die in the line of duty in the past 12 months and the first to die from COVID-19. Leal died just 16 days after Sgt. Sean Rios, 47, was gunned down after he apparently came upon a road rage incident and tried to intervene, officials said.

In October, Houston Police Sgt. Harold Preston, 65, was fatally shot while answering a domestic violence call, and in December, Sgt. Christopher Brewster, 32, was shot and killed while also responding to a domestic violence call. Officer Jason Knox, 35, was killed in May when his police helicopter crashed into a building in Houston.