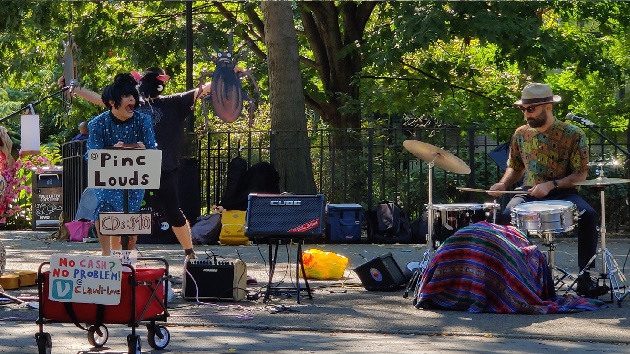 (NEW YORK) — Street performers are a common sight in New York City. Passersby can regularly catch a jazz performance on a Harlem street corner, a spoken word poet in the subway, or, as was the case on a warm Saturday afternoon last month, a punk rock concert in the East Village’s Tompkins Square Park.

Claudi Love is a singer, guitarist, and kalimba player, alongside Raimundo Atal on keyboard and Mark Mosterin on bass guitar. Together they’re Pinc Louds: a punk rock band known for New York City themed songs “Traffic Lights,” “Magical Garbage,” and “Sardines In A Can.”

Pinc Louds are buskers — another word for street performers — and can often be found playing in downtown Manhattan. Claudi says Tompkins Square Park is one of their favorite locations on account of the neighborhood’s long, punk rock history.

“The community here in the East Village is very, very special. There’s a there’s definitely something here. And an it comes from, I think, a lot of what happened in the in the 70s and 80s… It’s still very much alive.”

The band got started in 2015 after Claudi and Mark got to know each other while working as music teachers at a school in Brooklyn.

“I was, like, kind of the full time music teacher,” says Mosterin. “Claudi was the after-school, like, rock and roll teacher who would hang out with the kids who, like, had nowhere to go after school.”

At a party, Love met Atal, who was working on his Ph.D in sustainable development at Columbia University.

That same party is also where Pinc Louds got their name, according to Love.

“Somebody gave me a very pink and very loud dress all on the same night, and it kinda like just happened like that. It was really like — it felt like it was meant to be.”

While Atal is working on his PhD and Mosterin continues to teach, for Love, busking became a full time gig.

“This is my day job. Like, this is what I do for a living. I’m lucky enough that I can be a musician for a living. And I do it mostly by playing in the subways and on the street.”

Pink Louds aren’t exclusively buskers. They’ve built up a substantial following in the five years they’ve been active, and have performed at some bars and festivals around the city. They were even planning to go on tour this year, until coronavirus lockdown orders came down in the city in March.

For a time the Pinc Louds relied on their fans on social media, hosting live shows over video chat while their normal venues were closed down. Love even decorated her apartment with the appropriate busking decor.

“I kind of turned my house into a TV studio. I had, like, a giant traffic light and a big subway map, because I wanted to, like, give the street feeling to the to the whole thing.”

Love was able to make ends meet by collecting money through Venmo and Paypal. But money was only part of the equation, she says.

“Even though everything around me was falling down, I was able to, like, block a lot of the darkness out by doing that.”

In June, as the weather got warmer, Pink Louds gradually began moving their performances back outside. Eventually they discovered Tompkins Square Park, which hadn’t been an option pre-pandemic due to restrictions on amplifiers in public parks.

“I tried it and they didn’t kick me out,” says Love. “And I just fell in love with the place.”

Charlie Crespo runs a blog called the Manhattan Beat, following the city’s music scene. He says the Pinc Louds were pioneers in bringing music back to the streets of New York this summer.

“[Pinc Louds] pretty much saved the summer in downtown Manhattan by playing in Tompkins Square Park two or three times a week. They were probably the first,” says Crespo. “Their music is energizing. It was exciting and for anybody who passed through the park, it was just the most wonderful experience to hear live music again.”

Pinc Louds aren’t alone. Crespo tells ABC Audio that buskers all over the city are filling a musical gap left by traditional concerts and stage performances.

“Live music, being the oldest form of entertainment — even before theater, even before sports — touches us in ways that none of these other activities can touch us. And right now we’re very limited as to the opportunities that are open to us to hear live music.”

Cloudy says their audiences can grow to over a hundred people, depending on the day, and they do their best to keep things safe.

Pinc Louds’ performances also occasionally feature dancers like Jamie Emerson: a visual artist and puppeteer who makes costumes themed around the band’s music. For the song “Roaches In My Hair,” Emerson, complete with a black rat mask and a hand painted cockroach cutout in each hand, weaves his way through the crowd and does jumping jacks behind the musicians. He says the performance used to go even further.

“It’s a bit frustrating for us because a big part of the show – we were calling them ‘immersive cabaret.’ And so the idea was literally to invade the personal space of the audience, which we did and was great before the pandemic… It made the whole show, like, something that you don’t see from other bands,” he says. “Now it’s a little bit more difficult. We kind of still do it, but do it from 5 or 6 feet away.”

New York City reopened some indoor dining at the beginning of October following a summer of strict outdoor-only seating for restaurants. Charlie Crespo says the move provided a new opportunity for street musicians.

“Many sidewalk cafes that had never actually thought of having music in the past were approached by musicians who said ‘Can I play here?"” says Crespo. “The sidewalk cafes opened up an area for the bands to play. And now New York has many venues for music that did not exist in just the recent past.”

Though the future of indoor dining in New York City remains in doubt as coroanvirus cases rise, Crespo says the summer of street music made an impression on New Yorkers.

“We find street performers playing in parks and subway stations, and I find that we’re listening more than we used to. We’re listening closely, we’re listening deeper, because it’s touching us at a time when we really need this kind of soothing healing experience.”

As for Claudi, she says playing in Tompkins Square Park reminds her of what makes busking in New York City such an attractive experience.

“You got all the weird, crazy people, and you got families,” she says. “It’s just like a wonderful mix of people, all kinda getting by, you know? Sometimes with a little bit of friction — but it’s, like, that friction that makes life more special right? And it makes it more New York.”

Hear ABC Audio’s Mike Dobuski report on how Pinc Louds are reflecting on a summer of lockdowns in New York City.

Trump clemency list expected to include Lil Wayne and a once powerful NY politician
All armed National Guardsman on duty in DC vetted by FBI amid inauguration threats
‘The Bachelor’ recap: A night of drama ends with a shocking departure
Coronavirus live updates: US reports over 137,000 new cases
Survey says 60% consider themselves “total film buffs” thanks to pandemic binge-watching
‘WandaVision’ star Paul Bettany on his father’s struggle to come out of the closet