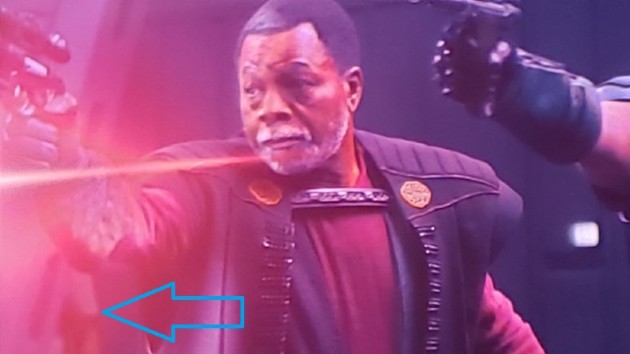 (LOS ANGELES) — As predicted, Star Wars fans are having a good-natured laugh at The Mandalorian’s “Game of Thrones coffee cup” moment — and so is director Carl Weathers.

Shortly after Weathers’ episode “The Seige” aired last Friday on Disney+, fans noticed a stray crew member lingering in one shot, and as we predicted, didn’t take much longer for those in the costuming community to joke about what it would take to build a “canon” costume of the man forever branded as “Jeans Guy” — and even create a mock action figure and a LEGO minifig of the guy, both complete with the piece of set that obscured half of his body.

The errant crew member even made an appearance as “Admiral Jeff-Blue Jeans” in the Star Wars encyclopedia Wookieepedia. The post was quickly taken down, but not before some wiseguy — or girl — described the character as being, “known for his strange look of a T-Shirt and blue jeans,” and “a cunning warrior and a respected individual.”

Buoyed by great reviews for the episode — dozens of which he personally responded to on Twitter — Weathers was laughing along with them, calling Jeans Guy, “A bogey!”

And speaking of the episode, the blue space macarons that a hungry Baby Yoda swiped from a stingy kid can now be yours, thanks to Williams-Sonoma, which is selling a pack of them for $50. They’re called Nevarro Nummies, after the planet on which The Child found the confection.

Turbulent week of weather ahead with 3 different storms tracking across US
Larry King remembered by celebrities, politicians: ‘A newsman who interviewed the newsmakers’
Pastor says addressing resistance to Biden administration is part of the job
John Krasinski, Dan Levy, Regina King are the first ‘SNL’ hosts of 2021
Disney moves ‘The King’s Man’, ‘Bob’s Burgers’ film, as COVID-19 shut-downs continue
“If” Chris Evans returns as Captain America, “I’d be very happy with that” says Anthony Mackie