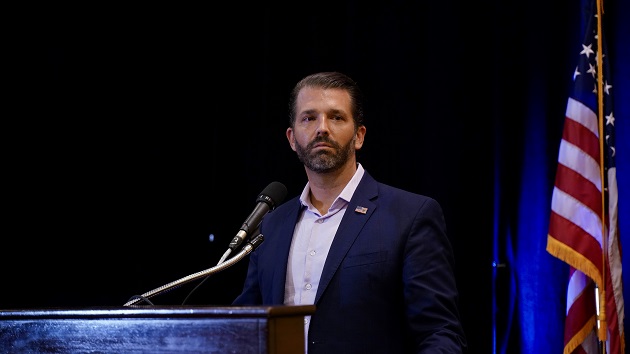 (WASHINGTON) — The president’s eldest son, 42, is the second of his children to test positive for the virus, following Barron Trump’s diagnosis last month.

“Don tested positive at the start of the week and has been quarantining out at his cabin since the result,” a spokesperson for Trump Jr. said. “He’s been completely asymptomatic so far and is following all medically recommended COVID-19 guidelines.”

President Donald Trump himself tested positive for COVID-19 on Oct. 1, and was hospitalized at Walter Reed Medical Center one day later. The positive test was part of an outbreak of the disease at the White House, which included positive tests for first lady Melania Trump, Barron, former adviser Kellyanne Conway, White House press secretary Kayleigh McEnany and several others.

Senior adviser Hope Hicks was the first to test positive in the president’s orbit.

Trump Jr.’s girlfriend, Kimberly Guilfoyle, tested positive for the virus in early July when the president was holding an event at Mount Rushmore. At the time, Donald Trump Jr. tested negative for the virus but self-isolated as a precaution and canceled several campaign events.

The president’s son has consistently downplayed the severity of the coronavirus pandemic, even after his father was diagnosed.

In an interview with Fox News on Oct. 30, he said deaths from the disease were “almost nothing.”

“Why aren’t they talking about deaths?” he told host Laura Ingraham. “The number’s almost nothing because we’ve gotten control and we understand how it works. We have the therapeutics to be able to deal with this.”

Those comments came the week after more than 5,600 people in the U.S. died from the COVID-19. Those numbers have only gone up in the resulting weeks as the country deals with a third wave of cases. There were 8,461 deaths in the U.S. last week, according to The COVID Tracking Project, the most in a week since May.

Donald Trump Jr. has also touted the baseless conspiracy that drug manufacturers delayed the announcement of vaccine results until after Election Day — a claim his father made again during a press conference on Friday.