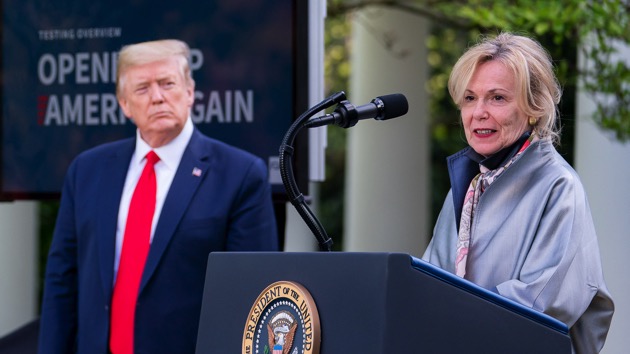 (WASHINGTON) — Dr. Deborah Birx, the Trump White House coronavirus response coordinator, would like to continue serving in a Biden administration, her colleagues said this week.

“I think if she were asked, she would say yes,” Ambassador James Glassman, a friend of Birx’s and a former George H.W. Bush administration official, told ABC News. “She can’t say yes now because she works for President Trump’s task force.”

Birx, a global health expert who runs the federal government’s program combatting HIV/AIDS, was tapped by the White House in February to serve a central role in the Trump administration’s response to the COVID-19 pandemic.

She has said she would be interested in staying on board at least long enough to help the incoming administration get up and running, her colleagues told ABC News.

“Right now there is work to do, and come January 20th, there will be different work to do,” a colleague of hers told ABC News. “And having that continuity and understanding what has worked, what hasn’t worked, is very important.”

But Birx has found herself in an increasingly complicated position as she combats the virus while serving a president who has ignored science and downplayed the pandemic. Her rosy presentations from the White House podium and presence alongside Trump at news conferences this spring — as well as her attempt to explain away President Donald Trump’s suggestion in April that Americans could inject disinfectant to treat the virus — have hurt her credibility and led to charges she has enabled the president.

Her colleagues said Birx could help President-elect Joe Biden’s team ensure a level of continuity to the U.S. pandemic response.

Trump has refused to acknowledge he lost reelection two weeks ago, and the federal government has blocked current administration officials leading the country’s COVID-19 response from coordinating with the incoming administration — or even being in touch with them. Birx has yet to hear from Biden’s transition team, according to one of her colleagues.

Birx, who holds the title of ambassador and helms the President’s Emergency Plan for AIDS Relief, or PEPFAR, has received criticism from top Democrats for her role in Trump’s White House, including House Speaker Nancy Pelosi, who told ABC News in August that she did not have confidence in the scientist. Pelosi’s spokesman said Friday her office had no additional comment.

After months of avoiding public disagreement with the president, Birx sounded the alarm just before the presidential election concluded, according to a Nov. 2 report in The Washington Post. In an internal report, Birx pleaded for “an aggressive balanced approach that is not being implemented,” according to the Post.

“It’s complicated,” Céline Gounder, a member of Biden’s COVID-19 advisory board, told Politico. “It’s almost like she herself has been politicized.”

Birx did not respond to a request for comment for this article.

If she were asked to stay on, it is likely Birx would be the only political appointee. Dr. Anthony Fauci, who is a career civil servant who has served multiple administrations, has signaled he plans to stay on as the nation’s top infectious expert as director of the National Institute of Allergy and Infectious Diseases; Birx’s current position running PEPFAR does not directly relate to the COVID-19 response, unlike Fauci’s.

Glassman, who held a senior role in the George H.W. Bush State Department and has befriended Birx through their mutual work in global health, said that he thought Birx, who was nominated in 2014 by President Barack Obama to her current position as the United States’ global AIDS coordinator, had “handled herself extremely well in an extremely difficult situation with Trump.”

“I don’t think that she would want to stay on that task force for a long period of time,” Glassman said, explaining that hopefully the virus would abate and the need for her — and a task force — would diminish over time. “I think she would want to be there at least in the beginning.”

After frequently appearing alongside the president, vice president and other top administration officials at news conferences on the pandemic this spring, Birx found herself increasingly sidelined as Trump further minimized science that did not line up with his re-election message. She has spent months traveling the country — to 43 states, according to a colleague — meeting with state and local officials and gaining a better understanding of how to encourage Americans to practice behavior that will slow the virus’s spread.

Gounder told CNN in an interview Thursday that Birx “holds really crucial information,” that the Biden team has not been able to access, such as key information about medical equipment supplies.

“She really is central in terms of the knowledge and the expertise that she holds,” Gounder said.