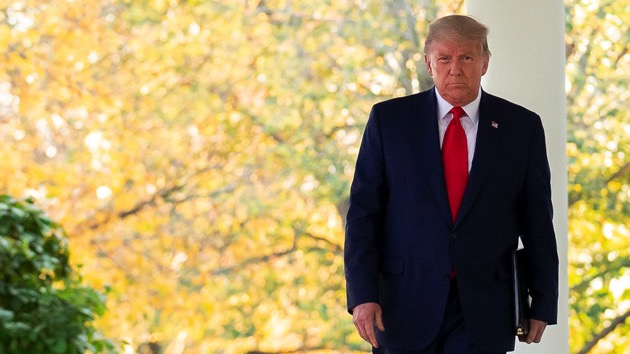 (WASHINGTON) — As the country mourns a quarter-million Americans lost to the coronavirus, President Donald Trump on Thursday did nothing to acknowledge the grim milestone and has largely ignored the raging pandemic since he lost reelection two weeks ago.

The president has remained silent about the death toll since his defeat, not appearing in public in days while frequently treating baseless claims about the election.

The White House did not respond to repeated inquiries from ABC News on whether Trump had any plans to recognize the more than 250,000 reported deaths related to COVID-19, although midday Thursday, it amended Vice President Mike Pence’s public schedule to note he and members of the White House coronavirus task force, which he leads, would brief members of the press at 4 p.m.

Trump himself has shown little interest in governing since his loss earlier this month, taking no apparent steps to address the pandemic that is killing Americans at a rate approaching the heights of its deadliest days this spring. An average of 1,209 Americans have been reported dead every day the past week, according to the COVID Tracking Project.

Nearly 17,000 Americans have been reported dead since the final day of the election — five times the number that died in the September 11, 2001, attacks.

Amid dozens of false claims about voting fraud the president has made on Twitter — as he seeks to sow discord in the wake of his loss — Trump has hardly touched on the coronavirus crisis aside from boasts about vaccines and therapeutics.

On Thursday, he yelled virtually in an all-caps tweet, “VACCINES ARE COMING FAST!!!”

But while pharmaceutical companies have announced promising progress with vaccine candidates in recent weeks, the U.S. Food and Drug Administration has yet to authorize them, and when one or two become available — as public health experts expect to be the case in the coming weeks — only high-risk groups will receive the first inoculations.

The vaccines will provide no salvation for the tens of thousands of Americans expected to die before they can get access to them.

When the nation marked 100,000 lives lost, Trump ordered the flags to half-staff after Democratic leaders wrote a letter requesting he do so. He has not repeated the gesture since.

In another all-caps tweet Thursday morning, Trump wrote that “THE COVID DRUGS NOW AVAILABLE TO MAKE PROPLE BETTER ARE AMAZING” — he misspelled “people” — “BUT SELDOM TALKED ABOUT BY THE MEDIA!”

While it is true that therapeutics have helped reduce the rate of patients who die from COVID-19, the daily number of Americans dying is shooting back up to the high levels the country faced earlier this year. And press coverage of the coronavirus does frequently highlight advances with therapeutics, although, like with Trump, news of potentially promising vaccines has dominated of late.

Since the election, Trump has held just two public events at which he has spoken, one of which — on Friday — focused on his administration’s effort to support the development of a vaccine.

Standing in the Rose Garden, Trump made no new announcements, instead touting the federal government’s role in the ultimate distribution of authorized vaccines.

With every passing day that the president refuses to concede, President-elect Joe Biden has said the president is imperiling more American lives to the deadly virus, warning that “more people may die if we don’t coordinate.”

The General Services Administration continues to withhold formal recognition of Biden’s victory, which means the Biden transition team cannot coordinate with outgoing officials to ensure a smooth hand-off of responsibilities in managing the greatest public health crisis in a century.

Top government health officials have warned Thanksgiving will likely aggravate outbreaks across the country, but again, Trump has remained silent on the risks.

“A lot of the guidelines you’re seeing are Orwellian,” said McEnany, who contracted COVID-19 in October as part of a larger outbreak at the White House. “We don’t lose our freedom in this country. We make responsible health decisions as individuals.”

By contrast, President-elect Biden said his family was taking precautions to make sure they are following the advice of health officials in limiting the size of their own family gathering, saying that while the restrictions may be difficult, “I just want to make sure we’re able to be together next Thanksgiving, next Christmas.”

While Trump has done little to demonstrate personal leadership over the pandemic, Pence has resumed holding meetings with the White House coronavirus task force and conference calls with the nation’s governors. On Thursday, the vice president was scheduled to lead another task force meeting before briefing the press.