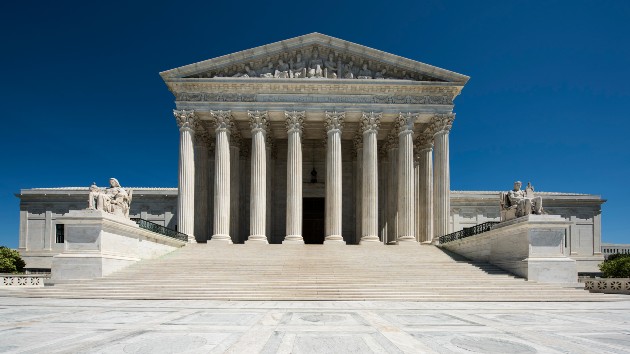 (WASHINGTON) — Houses of worship from Nevada to New York, chafing at attendance restrictions imposed by state governors during the coronavirus pandemic, are asking the U.S. Supreme Court to intervene on their behalf as a matter of religious freedom.

Two Orthodox Jewish synagogues in New York this week joined the Catholic Diocese of Brooklyn in asking the justices to suspend Gov. Andrew Cuomo’s order limiting church services to just 10 people in the highest-risk areas of the city.

“The Governor’s guilt-by-religious-association restrictions have made it impossible for applicants and their members to exercise their religious faith,” the Jewish groups wrote the court.

A Christian church in rural Nevada, which lost an appeal to the high court in July, has again petitioned the justices to strike down Gov. Steve Sisolak’s 50-person cap on indoor religious services, while local casinos, restaurants and indoor amusement parks are allowed higher numbers of patrons.

The governors have said the restrictions are consistent with public health guidelines from the Centers for Disease Control and Prevention and are necessary to help control the spread of COVID-19.

Prolonged social interaction in confined spaces increases the risk of infection, according to the CDC. The agency also says “the higher the level of community transmission in the area that the gathering is being held, the higher the risk of COVID-19 spreading during a gathering.”

Last month, as New York City began to see a resurgence of coronavirus cases and hospitalizations, Cuomo cited the “religious practices” of Orthodox Jews as one of the driving factors.

“We’re now having issues in the Orthodox Jewish community in New York, where because of their religious practices, etc., we’re seeing a spread,” Cuomo said at the time. The comments drew protests from Jewish faith leaders across the city.

The Diocese of Brooklyn, which says it has enforced strict mask-wearing and social distancing requirements, argues that Cuomo’s policy fails to take into account the size of a building and has been inconsistently applied, allowing numerous secular businesses to operate without any capacity restrictions.

“There has not been any COVID-19 outbreak in any of the Diocese’s churches since they reopened,” the petition said.

Calvary Chapel in Nevada says the Supreme Court should “solve the nationwide problem of government discrimination against churches in ad hoc COVID-19 orders” once and for all.

It’s unclear whether the justices will take up any or all of the cases.

The Supreme Court has so far given significant leeway to state officials responding to the virus emergency. In a pair of separate cases earlier this year, 5-4 majorities rejected requests by faith groups to block state capacity restrictions for services during the pandemic.

“Although California’s guidelines place restrictions on places of worship, those restrictions appear consistent with the free exercise clause of the First Amendment,” wrote Chief Justice John Roberts in a concurring opinion in one of the cases in May.

Since those decisions, however, the makeup of the court has dramatically shifted with conservative Justice Amy Coney Barrett replacing the late Justice Ruth Bader Ginsburg.

Barrett’s vote in the pending cases from Nevada and New York could be decisive.

“There is no world in which the Constitution permits Nevada to favor Caesars Palace over Calvary Chapel,” Justice Neil Gorsuch said in dissent back in July.

Justice Samuel Alito, in an extraordinarily opinionated public speech last week, signaled that he hopes the court will roll back the restrictions with upcoming decisions.

“Take a look at the Constitution. You will see the Free Exercise Clause of the First Amendment, which protects religious liberty,” Alito told a conservative legal conference. “You will not find a craps clause or a blackjack clause or a slot-machine clause.”

“Religious liberty is in danger of becoming a second-class right,” he said.

One in five Americans think houses of worship should be given greater flexibility with COVID-19 public health restrictions, according to a recent study by the Pew Research Center.

Among those Americans who typically attend religious services at least once a month, roughly a third said their place of worship should remain closed in the pandemic. Fifty-seven percent said they should open for services with changes as a result of the outbreak.

DHS to combat domestic violent extremism with $77 million from FEMA
Coronavirus causes drop in sexual assault reports at military academies
Teyonah Parris says becoming Marvel’s Monica Rambeau has been her “most physical role to date”
Minority TikTok influencers are bringing awareness of COVID-19 vaccines to their communities
Michael Cudlitz on getting to know his character, and escaping COVID, with ‘Clarice’
‘Queer Eye’ star Karamo Brown is ready to start dating again: “I want to be married”