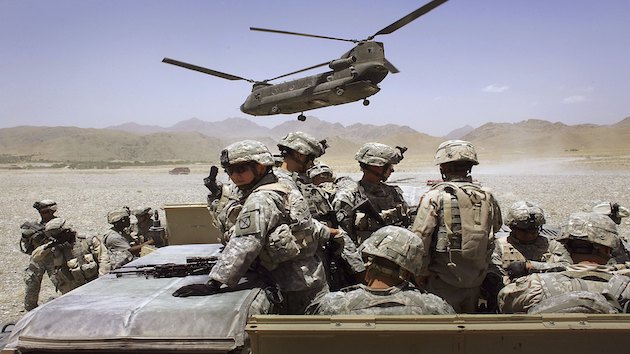 (WASHINGTON) — The Pentagon is expecting orders by the end of this week that will reduce troop levels to 2,500 in Afghanistan and 2,500 in Iraq by mid-January, according to two U.S. officials.

President Donald Trump is expected to issue the orders for the reduction in troop levels in both countries later this week, according to both U.S. officials.

There are currently 4,500 U.S. troops in Afghanistan and 3,000 in Iraq — troop levels only recently reached following previous troop reductions in each country.

The reduction to 2,500 in each country is in line with what national security adviser Robert O’Brien said in mid-October comments that Gen. Mark Milley, the chairman of the Joint Chiefs of Staff, later labeled as “speculation” because no presidential decision had been made.

But the new troop reduction in Afghanistan is not the full withdrawal of all 4,500 troops that has been the subject of recent speculation since Chris Miller became the acting secretary of defense last week, after Trump fired Mark Esper from the post.

Miller’s arrival coincided with the forced resignations of other top officials for policy and intelligence at the Pentagon with Trump loyalists, whose previous comments about the U.S. military presence in Afghanistan had led some officials to express concern that Trump might order a full withdrawal from Afghanistan.

Under the peace deal signed between the U.S. and the Taliban earlier this year, the U.S. committed to pull out all of its troops by May, 2021 as long as the U.S. judged that the Taliban was abiding by the agreement not to attack U.S. military forces in Afghanistan.

Several top U.S. officials have said that while the Taliban has been very careful not to attack U.S. forces they have launched unrelenting attacks against Afghan security forces. Aside from urging the Taliban to cease such attacks, they have hinted that if they continue the U.S. might reassess the commitment to a full withdrawal.

In his first message to the force that was released overnight on Friday, Miller hinted at the end of the war in Afghanistan targeting al-Qaida.

“We are on the verge of defeating Al Qaida and its associates, but we must avoid our past strategic error of failing to see the fight through to the finish,” Miller wrote. “Indeed, this fight has been long, our sacrifices have been enormous, and many are weary of war — I’m one of them — but this is the critical phase in which we transition our efforts from a leadership to supporting role.”

“All wars must end,” he added. “Ending wars requires compromise and partnership. We met the challenge; we gave it our all. Now, it’s time to come home.

President-elect Joe Biden has expressed support for troop reductions in Afghanistan that would leave a military counter terrorism presence in the country to prevent a resurgence by al-Qaida or the Islamic State.

“These ‘forever wars’ have to end. I support drawing down the troops, Biden told Stars and Stripes in September. “But here’s the problem, we still have to worry about terrorism and (the Islamic State).”

“I think we need special ops capacity to coordinate with our allies,” Biden said, adding there should be a maximum of 1,500 to 2,000 on the ground, a smaller force that what he would likely inherit from Trump.

Any reductions in troop levels in Afghanistan should be “responsible” and “based on conditions on the ground as determined by our military commander supported by intelligence assessments to ensure we maintain stability in the country, preserve our hard-fought gains, and the survival of the recognized government,” said Mick Mulroy, an ABC News consultant and former deputy assistant secretary of defense for the Middle East.

Mulroy supports keeping a U.S. military counter-terrorism presence in Afghanistan to prevent terror groups from using the country as a safe haven from which to launch terror attacks against the U.S.

While favoring a troop reduction in Iraq, Mulroy believes it should not be done “at the expense of the gains we have made.”

“Here, like in Afghanistan, we should rely on our military commander supported by intelligence assessments, to make that determination,” said Mulroy who also served in both countries.