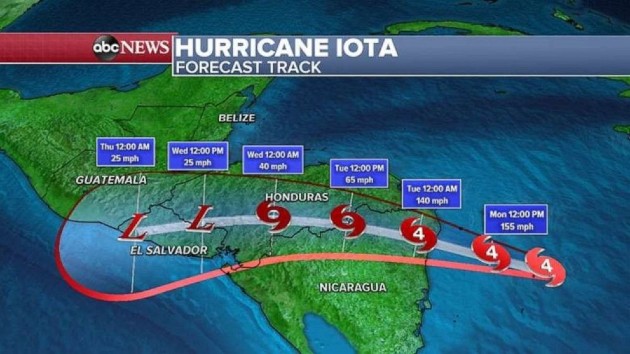 Iota is forecast to make landfall Monday night in Nicaragua, near where Eta struck two weeks ago.

Wind gusts could reach 160 mph as Nicaragua and Honduras may see storm surge of 20 feet.

Over the next few days, rainfall could reach 2 to 3 feet in parts of hard-hit Nicaragua, Honduras, Belize and Guatemala.

Mudslides and flash flooding are expected.

Iota, the strongest hurricane of 2020 to appear in the Atlantic Ocean, is the latest calendar-year Atlantic hurricane on record, surpassing the Cuba Hurricane on Nov. 8, 1932.

Meanwhile, the Northeast is forecast to see the coldest air of the season over the next few days.

The coldest morning is expected to be Wednesday, when it could feel like the upper teens in Boston, near 20 degrees in New York City and in the mid to upper 20s in Philadelphia and Washington, D.C.

With the cold air moving over the relatively mild Great Lakes, lake-effect snow is expected in western Pennsylvania and New York, parts of which could see half a foot of snow over the next 48 hours.