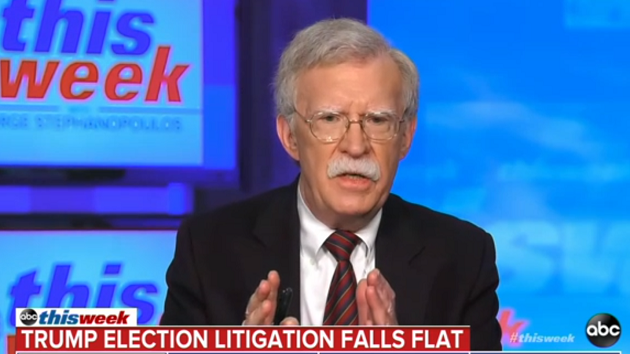 (WASHINGTON) — President Donald Trump’s former national security adviser urged Republican Party leaders Sunday to acknowledge and explain the presidential election result to their supporters rather than continuing to appease the president as he promotes baseless claims of voter fraud.

“I think as every day goes by, it’s clearer and clearer there isn’t any evidence,” John Bolton said on ABC’s “This Week,” dismissing Trump’s claim that President-elect Joe Biden’s victory is illegitimate. “But if the Republican voters are only hearing Donald Trump’s misrepresentations, it’s not surprising that they believe it.”

“It’s critical for other Republican leaders to stand up and explain what actually happened: Donald Trump lost what, by any evidence we have so far, was a free and fair election,” he continued.

The appeal from Bolton, who has been a sharp critic of the president’s since leaving his national security post in September 2019, came on a morning during which Trump, via Twitter, made one of his first acknowledgements of President-elect Joe Biden’s victory — albeit while repeating his unsubstantiated claim that the election was rigged. He tweeted again to say that he was not conceding.

“This Week” co-anchor Martha Raddatz noted that the president’s refusal to accept the election’s results is delaying the transition to the Biden administration and holding up intelligence briefings for the president-elect, and later asked former Homeland Security Secretary Jeh Johnson, in a separate interview, about the importance of the changeover.

“How crucial is this period of presidential transition?” Raddatz asked.

“A new government cannot start on Jan. 20 from a standing-still position,” Johnson said, noting that he personally visited Trump Tower four years ago to brief the former real estate mogul. “This is what transitions are for. Intelligence briefings, (presidential daily briefings), when you’re in office — in national security — are your eyes and ears.

Bolton shared a similar sentiment, characterizing the issue as one in which Trump was putting himself ahead of the country. A veteran of the Ronald Reagan, George H.W. Bush and George W. Bush administrations, the former national security adviser drew on his past experience as he criticized the effect that Trump’s legal wrangling may have upon the U.S.

“I know how difficult it is coming in and going out,” he said. “And every day that he delays under the pretense that he’s simply asking for his legal remedies ultimately is to the country’s disadvantage, certainly in the national security space, and I think given the coronavirus pandemic and the effective distribution of the vaccine and a range of other things as well.”

Both Bolton and Johnson further denounced Trump’s decision this week to fire Defense Secretary Mark Esper, expressing concern about the continuity of leadership at the Pentagon and the message it sends to the nation’s troops.

“It’s destructive,” Bolton said. “I mean, when you decapitate the Office of the Secretary of Defense with less than 10 weeks to go in the administration, really it’s very damaging, not just for the current administration, but for the incoming administration as well.”

“I’m greatly concerned,” said Johnson, describing the Pentagon as “typically an island of stability in our U.S. government.”

“If I were in the Biden transition team right now, I’d be very focused, as priority A, on restoring stability in our national security,” he continued.

The defense secretary position left vacant by Esper’s termination is one of several Johnson is rumored to be under consideration for within the Biden administration. Prior to his leadership of DHS during President Barack Obama’s second term, he served as General Counsel of the Department of Defense.

“What do you think you would bring to that job and would you accept it, if offered?” Raddatz asked Johnson Sunday.

But prior to the start of a Biden administration, Trump must vacate the White House — an action that would signify the defeat he has refused to affirm. Bolton said Sunday that the president’s post-election posture has been in keeping with his character, but that he ultimately doesn’t believe Trump will refuse to give up the presidency.