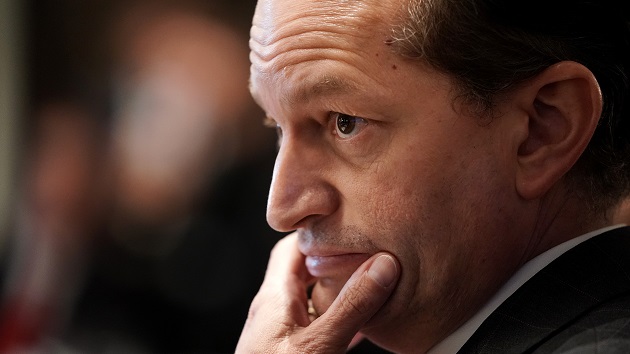 (WASHINGTON) — Alex Acosta, then-U.S. Attorney for the Southern District of Florida, exercised “poor judgment” when he resolved a federal investigation into Jeffrey Epstein through a state-based plea agreement in 2008, the Justice Department’s Office of Professional Responsibility has concluded in a new report.

The finding was revealed in an executive summary of the report released by the Department of Justice Thursday.

The Office of Professional Responsibility cleared Acosta of misconduct in opting to resolve the case in the way that he did.

“Acosta’s decision to decline to initiate a federal prosecution of Epstein was within the scope of his authority, and OPR did not find evidence that his decision was based on corruption or other impermissible considerations, such as Epstein’s wealth, status, or associations,” the summary said.

“Nevertheless, OPR concludes that Acosta’s decision to resolve the federal investigation through the NPA constitutes poor judgment. Although this decision was within the scope of Acosta’s broad discretion and OPR does not find that it resulted from improper factors, the NPA was a flawed mechanism for satisfying the federal interest that caused the government to open its investigation of Epstein.”

Sen. Ben Sasse, R-Neb., who has been among the most vocal members of Congress demanding answers about the Justice Department’s handling of Epstein, excoriated the conclusion.

“Letting a well-connected billionaire get away with child rape and international sex trafficking isn’t ‘poor judgment’ — it is a disgusting failure. Americans ought to be enraged,” Sasse said in a statement.

Acosta, who would later be named the secretary of the Department of Labor in the Trump administration, and almost everyone else involved has left government. Even if there had been a finding of misconduct there would be no authority to punish. Acosta resigned as Labor secretary in July 2019 following criticism of his handling of the Epstein case.

“I am pleased that OPR finally has completed its investigation but am disappointed that it has not released the full report so the victims and the public can have a fuller accounting of the depth of interference that led to the patently unjust outcome in the Epstein case,” said Marie Villafaña, a former assistant U.S. Attorney in Miami who led the office’s investigation of Epstein, in a statement. “That injustice, I believe, was the result of deep, implicit institutional biases that prevented me and the FBI agents who worked diligently on this case from holding Mr. Epstein accountable for his crimes.”

“By not considering those implicit biases based on gender and socioeconomic status, OPR lost an opportunity to make recommendations for institutional changes that could prevent results like this one from occurring in the future,” she added.

The report was launched in early 2019, on the heels of renewed public outrage over the Epstein deal that was sparked by an in-depth series by the Miami Herald.

Alleged victims of Epstein and their attorneys were briefed on the report’s executive summary during a lengthy meeting Thursday morning at the offices of the Miami division of the FBI.

Epstein first came under investigation for alleged sex crimes against minors in 2005 by the town of Palm Beach Police Department. The FBI and U.S. Attorney’s Office in Miami picked up the case in 2006, after then-police chief of Palm Beach Michael Reiter publicly criticized the handling of the case by Barry Krischer, then the state’s attorney for Palm Beach County.

Federal investigators ultimately identified more than 30 alleged underage victims and prepared a 53-page indictment of Epstein that could have sent him to prison for decades if convicted. But the indictment was never pursued. Instead, prosecutors in Miami entered into a non-prosecution agreement with Epstein that required him to plead guilty to two prostitution-related charges in Palm Beach county court.

He served just 13 months of an 18-month sentence and was granted lenient work release privileges that allowed him to spend up to 16 hours a day, seven days a week at a West Palm Beach office building and his home on Palm Beach Island.

One week after Epstein entered his guilty pleas in state court in June 2008, two alleged victims filed a lawsuit against the federal government alleging that the so-called “sweetheart deal” with Epstein was reached in violation of their rights as alleged victims of federal crimes. Eleven years later, in February 2019, a federal judge in West Palm Beach ruled in favor of the victims, determining that federal prosecutors in Miami — under the leadership of Acosta — violated the Crime Victims’ Rights Act by not conferring with the alleged victims prior to entering the deal.

The court was in the process of determining if Epstein’s deal should be rescinded — but then Epstein died by suicide in custody in August 2019. The case was then dismissed, but one of the alleged victims, Courtney Wild, has appealed that ruling to the 11th Circuit Court of Appeals. A hearing is scheduled for next month in Wild’s appeal.

Wild has alleged that she was recruited as a 14-year-old by a peer to Epstein’s Palm Beach home under the expectation that she would be giving an older man a massage. She alleges that Epstein sexually abused her multiple times over the next two years. Wild was one of the more than 30 alleged victims identified and interviewed during the federal investigation. She was the only victim to attend both of Epstein’s court appearances in New York following his arrest in July 2019.

For more than 12 years, Wild has been pressing her case against the government trying to get Epstein’s deal, which also conferred immunity in Florida to Epstein’s alleged co-conspirators, torn up.

“Epstein’s death shouldn’t mean all the wrongdoing in this case is swept under the rug,” Wild told ABC News earlier this year. “People helped him commit these crimes. Everyone needs to be held accountable for the role they played in this.”

These vaccine mandates are already in place to attend school in the US
COVID-19 live updates: US reports highest daily death toll in nearly 7 months
Derek Chauvin pleads not guilty in 2017 excessive force case involving 14-year-old Black boy
Apprehensions at the southern border surpass 200,000 in August
Democratic drama as House advances Biden’s agenda: What’s in the draft reconciliation bill?
After testifying on sexual abuse, Aly Raisman says she hopes ‘somebody listens to us’