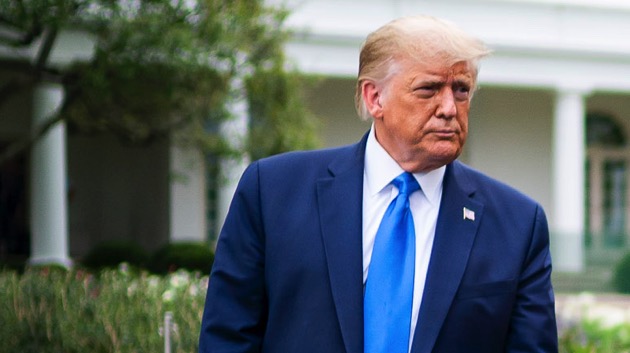 (WASHINGTON) — President Donald Trump, who has remained almost entirely out of sight for nearly a week, has demonstrated little evidence of — or interest in — governing in the wake of the election, as he persists in refusing to concede defeat.

The president’s absence from the spotlight — the longest stretch of silence of his presidency — comes as the coronavirus pandemic rages across most of the country and the nation continues to break records for new cases and hospitalizations.

Closer to home, more top aides and allies of the president have tested positive for the virus after a packed, indoor White House party last week where Trump falsely claimed victory in the election.

On Thursday, the president again had no public events but is scheduled to have lunch with Vice President Mike Pence and an afternoon meeting with Secretary of State Mike Pompeo and Treasury Secretary Steven Mnuchin.

The White House was putting the best face on what was, for Trump, an unusual lack of trying to dominate the narrative and show he was in charge.

“In addition to having lunch with the Vice President and meeting with the Secretary of State and Secretary of the Treasury today, President Trump continues to fight hard for a free and fair election while at the same time carrying out all of his duties to put America First,” deputy press secretary Judd Deere told ABC News. “He’s also working to advance meaningful economic stimulus, engaging members of Congress on a government funding proposal, and ensuring state and local governments have what they need to respond to the ongoing pandemic.”

Deere’s statement was nearly exactly the same as what he shared with ABC News on Tuesday when asked for more details about Trump’s activities.

Aside from a brief outing to Arlington National Cemetery Wednesday to honor veterans, the president’s schedule has been otherwise devoid of publicly announced events.

The typically loquacious president has not gone before cameras to make remarks or answer questions since last Thursday, when he went to the White House press briefing room to make the unfounded allegation that the election was being stolen from him. Since former Vice President Joe Biden was on Saturday projected to be the president-elect, Trump has only made his voice heard on Twitter.

Kayleigh McEnany, the White House press secretary who more recently has made television appearances in her unprecedented dual role as a Trump campaign adviser, on Thursday couldn’t say when the next time the American people could expect to hear from the president. McEnany said Trump was letting his legal team do the talking in contesting the election.

The president’s legal team has yet to produce evidence of widespread fraud.

“I think you’ll hear from the president at the right moment,” McEnany said. “He gave a press conference, of course, last Thursday, but right now he’s letting this litigation play out, letting his lawyers take the lead on this while he stays hard at work for the American people on COVID and other matters. You will be hearing from the president, you hear from him on Twitter, and you’ll be hearing from him at the right moment.”

Pence, meanwhile, has continued to present some semblance of normalcy, as he avoids embracing the most incendiary, baseless claims of electoral fraud pushed by the president.

On Monday, the vice president led a White House coronavirus task force meeting for the first time in nearly three weeks, and on Tuesday he traveled to Capitol Hill to meet with Senate Republicans.

As Trump remained out of view, Pence’s office made sure the public saw the vice president in action, tweeting out photographs and quotes from the meetings and making sure cameras were documenting Pence’s otherwise ordinary walk into the White House on Monday.

The president himself has not attended a meeting of his coronavirus task force in months. The federal government’s top infectious disease expert, Dr. Anthony Fauci, said the last time he spoke with Trump was hospitalized with the coronavirus in early October.

Instead, as his campaign for re-election came to a close before voting ended Nov. 3, Trump held dozens of packed rallies with little social distancing or mask-wearing — often in states where the virus was raging out of control. The events, public health experts have warned, may have accelerated the spread of COVID-19 in the surrounding communities.

Trump has fired off many tweets making debunked, baseless claims about electoral fraud, but he has barely mentioned the pandemic except to further a conspiracy theory that positive news about a vaccine was delayed to hurt him politically.