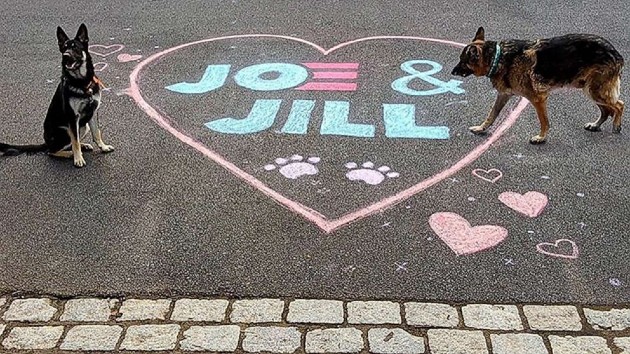 (WASHINGTON) — For the first time in four years, pets are heading back to the White House.

Barking up the same tree as President-elect Joe Biden and Vice President-elect Kamala Harris, whose campaign boasted several firsts, the soon-to-be first canines are slated to make major history of their own as Major — the family’s second German shepherd — will be the first-ever shelter dog to live at the White House.

The Biden family adopted 2-year-old Major two years ago from the Delaware Humane Association — a few months before Biden announced his run for the presidency. They welcomed their first German shepherd, Champ, a month after the 2008 election.

“I have two German shepherds. One thinks he’s Secret Service and he is,” Biden said of 12-year-old Champ.

“And the other one is a puppy,” he said while campaigning in Iowa last year. “My vet said, ‘your shepherd’s 12 -years-old. He’s getting slow. The best thing to keep him going is get another little puppy."”

The Delaware Humane Association, a no-kill shelter, said Major came from a litter of six German shepherd puppies that “were surrendered and not doing well at all” after being exposed to “something toxic” in a previous home.

“Today is Major’s lucky day!,” the humane society wrote on its Facebook page at the time. “Not only did Major find his forever home, but he got adopted by Vice President Joe Biden & Dr. Jill Biden! The Bidens have gotten to know Major while fostering him and are now ready to make the adoption official.”

Champ, a name coined by his grandchildren but also the nickname Biden’s father gave him when he was a child, lived at the vice presidential residence at the U.S. Naval Observatory. Months into his first term as the second dog, the family had to replace the off-white carpet at the residence with hardwood floors because of “the occasional puppy accident,” a Biden spokeswoman told The Washington Post at the time. She added that he’d “generally been a good dog.”

Both Champ and Major are frequently featured on the Biden family’s social media pages and made several appearances leading up to the election in an appeal to pet-lovers.

“No ruff days on the trail when I have some Major motivation,” Biden wrote alongside a video of Major licking his face.

The Biden campaign even launched “Dog Lovers for Joe” with the slogan “Choose your human wisely” and ran on the promise that dogs would return to the people’s house.

“Red state or Blue state, we all can agree on the power of dogs,” the website said. “It’s time we had a dog-lover back in the White House.”

Outgoing President Donald Trump, meanwhile, is the first president in more than a century not to have a pet of some kind at the White House. Trump reportedly doesn’t like dogs and in February 2019 said he doesn’t “have any time” to have a pet and that getting one “feels a little phony.”

“How would I look walking a dog on the White House lawn?” Trump said at a rally in El Paso, Texas.

But with Biden projected to win the White House, Major and Champ will be joining an elite list of presidential pets — some wackier than others.

President Theodore Roosevelt’s mongrel terrier Skip was famously dubbed the Teddy Roosevelt Terrier, but he owned dozens of other animals including a one-legged rooster, snakes, guinea pigs and horses.

President Barack Obama promised his daughters a dog while they were on the campaign trail — win or lose. Sen. Ted Kennedy gave them Bo, a Portuguese water dog, a few months after Obama took office and Sunny was added to the family in 2013.

“Sasha and Malia, I love you both so much, and you have earned the new puppy that’s coming with us to the White House,” Obama said in 2008.

Similarly, Biden had promised his wife Jill Biden he’d wait on getting a German shepherd — Champ — until after their winning 2008 campaign.

One of the oddest White House pets was a raccoon later named Rebecca that was sent to President Calvin Coolidge to be served at Thanksgiving dinner. Coolidge pardoned the raccoon instead and adopted it.

‘Our Kind of People’: Yaya DaCosta explains why her character’s feelings of entitlement are a good thing
‘No Time To Die’ gets royal reception at Royal Albert Hall premiere
“The world has changed. He hasn’t” – ‘Curb Your Enthusiasm’ teaser reveals premiere date for Season 11
Gabby Petito’s parents ask public to help authorities find Laundrie, aid in helping other missing people
Issa Rae discusses married life and the possibility of having kids in ‘Self’ magazine
Treasury secretary warns of ‘calamity’ if Congress doesn’t raise debt limit