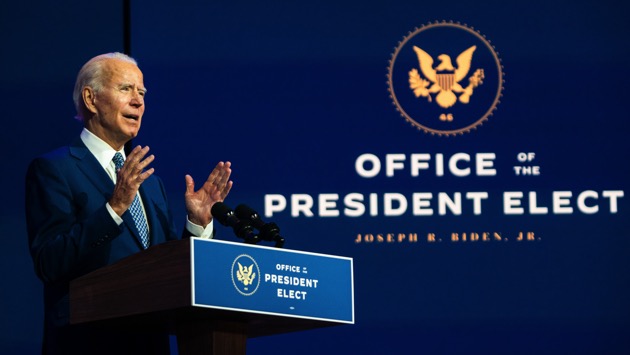 (WASHINGTON) — While President Donald Trump has largely and uncharacteristically stayed out of public view in the days since Joe Biden was projected the winner of the presidential election , Biden has presented himself as getting down to the work of governing.

It’s unclear why the current president has kept out of sight, but Tuesday marked the fifth day of no planned public appearances as he refuses to concede, legal challenges look unlikely to succeed and vote counts building for Biden in key states suggest any contested results would not make a difference in the final outcome.

As the nation marked the grim milestone of 10 million COVID-19 cases, Biden on Monday held a briefing with his newly unveiled coronavirus advisory board and pleaded with Americans to wear a mask as he warned of a “dark winter” ahead in fighting the pandemic.

“We could save tens of thousands of lives if everyone would just wear a mask for the next few months. Not Democratic or Republican lives, American lives,” Biden said. “Please, I implore you, wear a mask.”

Biden has also begun fielding calls from foreign heads of state, receiving his first congratulatory call on Monday from Canadian Prime Minister Justin Trudeau. The two also spoke about the need to work together to fight the coronavirus pandemic and address other shared global issues, such as climate change, according to readouts of the call.

At the same time, President Trump on Monday remained out of public view with no events listed on his public schedule. A Marine was posted outside the West Wing entrance for at least part of the day, indicating the president was in the Oval Office.

Though he remained out of public view Monday, the president did make his voice heard on Twitter to advance baseless allegations of widespread voter fraud, to complain that Pfizer’s vaccine announcement was not made prior to the election, and most notably, to fire Defense Secretary Mark Esper.

“Mark Esper has been terminated. I would like to thank him for his service,” Trump tweeted.

Esper, who was with the president during his infamous photo-op at St. John’s Church across from the White House in June following the forcible removal of mostly peaceful protestors who were cleared out with tear gas and flash-bang grenades, drew the president’s ire for opposing the use of active-duty military under the Insurrection Act to deal with the protests sparked by the death of George Floyd, as the president had threatened to order.

Asked in August if he had confidence in Esper, the president responded by mocking the secretary with a nickname that portrayed him as a “yes man.”

The president last went before cameras on Thursday night, to allege without evidence that unnamed opponents were trying to “steal the election from us.” He was also spotted golfing at his course in Virginia over the weekend, at the same time that Biden was declared the victor of the election.

By contrast to the president’s light schedule Tuesday, the president-elect was scheduled to deliver remarks on the Affordable Care Act as the Supreme Court heard arguments in a case supported by the Trump administration to strike down President Barack Obama’s landmark healthcare law.

Biden was also scheduled to hold briefings with transition advisors.

The Biden transition team on Monday said it was weighing the possibility of legal action if the administration continues to withhold recognition.

‘Our Kind of People’: Yaya DaCosta explains why her character’s feelings of entitlement are a good thing
Issa Rae discusses married life and the possibility of having kids in ‘Self’ magazine
Treasury secretary warns of ‘calamity’ if Congress doesn’t raise debt limit
Family of missing 19-year-old Miya Marcano hoping for safe return
Milley defends calls to China amid concerns about Trump
Capital Gazette shooter sentenced to life in prison without the possibility of parole