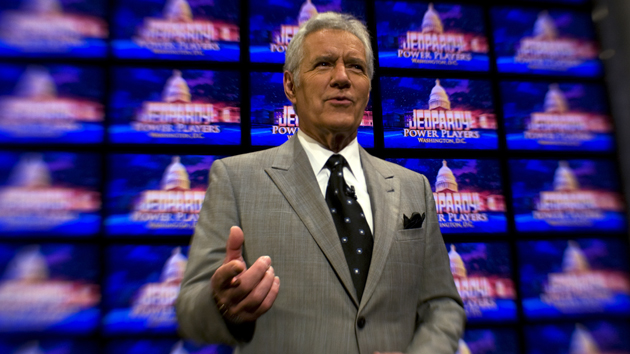 (NEW YORK) — Alex Trebek, the popular TV personality best-known for hosting the game show Jeopardy! for over 30 years, has died at the age of 80 after being diagnosed with stage four pancreatic cancer in March 2019.

A statement from Jeopardy!’s producers Sunday says Trebek “passed away peacefully at home early this morning, surrounded by family and friends.”  The show’s executive producer, Mike Richards, called Trebek “a legend of the industry” whose death is “an enormous loss.”

“Working beside him for the past year and a half as he heroically continued to host Jeopardy! was an incredible honor. His belief in the importance of the show and his willingness to push himself to perform at the highest level was the most inspiring demonstration of courage I have ever seen,” Richards also said. “His constant desire to learn, his kindness, and his professionalism will be with all of us forever,”

A native of Sudbury, Ontario, Canada, Trebek began his TV career in the early 1960s, reading news and covering various sports events for the Canadian Broadcasting Corporation. He eventually moved on to hosting games shows for the network.

In 1973, Trebek moved to the U.S., where he landed a job hosting the NBC game show The Wizard of Odds, followed by the popular High Rollers a year later. Those stints were followed by the short-lived CBS game show Double Dare, the syndicated The $128,000 Question, as well as Card Sharks, Battlestars, Classic Concentration, To Tell the Truth and, ultimately, Jeopardy, which was being revived after nine years off the air.  Trebek hosted Jeopardy! from the revival’s 1984 debut until his death.

Trebek also made appearances in numerous television series, including the comedy How I Met You Mother, usually playing himself.  He was also regularly spoofed on Saturday Night Live, with former cast member Will Ferrell playing Trebek.

In March of 2019, Trebek announced he was diagnosed with stage four pancreatic cancer. “Now, normally the prognosis for this is not very encouraging but I’m gonna fight this,” he said at the time. “And I’m gonna keep working and with the love and support of my family and friends, and with the help of your prayers, also, I plan the beat the low-survival-rate statistics of this disease.”

He then joked, “Truth told, I have to!  Because under the terms of my contract, I have to host Jeopardy! for three more years! So help me!  Keep the faith and we’ll win. We’ll get it done. Thank you.”

Trebek told People magazine in May 2019 that as a result of chemotherapy, his tumors had shrunk by a “mind boggling” 50% or more.  After announcing in August that he’d completed chemotherapy, Trebek returned to Jeopardy! for the show’s 36th season a month later. However, shortly after the season premiere, he revealed needed to undergo another round of chemotherapy.

Still, Trebek remained upbeat, telling ABC’s Good Morning America, “I realize that there is an end in sight for me, just as there is for everyone else.”

Trebek added: “One line that I have used with our staff…is that when I do pass on, one thing they will not say at my funeral is, ‘Oh, he was taken from us too soon.’ Hey guys. I’m 79 years old. I’ve had one hell of a good life.…the thought of passing on doesn’t frighten me.”

Trebek had also suffered several other significant health issues. In January of 2018, he announced that he’d undergone surgery over the Christmas holiday to treat a subdural hematoma — a blood clot within the lining of the brain — which he suffered as a result of a fall.  He also suffered a mild heart attack in 2012 and underwent knee surgery in 2015.

Trebek is survived by Jean, his wife of more than 30 years, as well as three children.

Female US service member allegedly assaulted by male Afghan refugees at Fort Bliss
Harris interview with ‘The View’ delayed after co-hosts test positive for COVID-19
Haitian migrants cleared from camp at Texas border but controversy continues
A century after arson decimated its Chinatown, San Jose to apologize for past racism and injustices
After people spoke out about COVID-19 vaccines and period changes, research is underway
Willie Garson died from pancreatic cancer, his obituary reveals