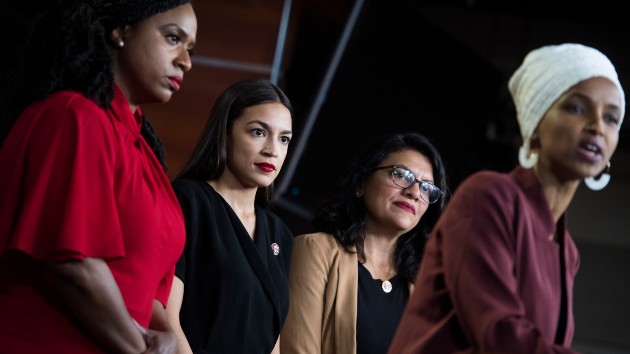 (WASHINGTON) — The four progressive congresswomen of color, who won historic races in 2018 and became popular targets of President Donald Trump and the Republican Party, each won their re-election races, securing second terms in the 117th Congress.

Rep. Alexandria Ocasio-Cortez, D-N.Y., Rep. Ayanna Pressley, D-Mass., Rep. Ilhan Omar, D-Minn., and Rep. Rashida Tlaib, D-Mich. — who became known as “The Squad” — quickly became social media sensations and national progressive firebrands over the past couple of years, as they energized the progressive wing of the Democratic Party and drew the ire of Trump.

“Our sisterhood is resilient,” Omar tweeted on Tuesday night in the wake of their projected wins.

The nickname, which has become a term of endearment used by supporters, took off after Ocasio-Cortez shared a photo on Nov. 12, 2018 of the four incoming lawmakers sitting together, along with the caption, “Squad.”

But the moniker also been used by the GOP and Trump, who weaponized the group during his presidential campaign against Democratic presidential nominee Joe Biden, casting the freshmen lawmakers as “radical” and “socialist” representatives of the Democratic Party.

All four congresswomen hold seats in reliably blue districts and although Omar faced a challenge from a well-funded primary opponent, neither of them faced serious challenges in the general election.

“Thank you to the Bronx & Queens for re-electing me to the House despite the millions spent against us, & trusting me to represent you once more,” the congresswoman, who is also referred to as “AOC,” tweeted on Tuesday night.

Ocasio-Cortez endorsed Sen. Bernie Sanders, along with Tlaib and Omar, in the Democratic primary and represented Sanders at the Democratic National Convention.

She thanked her supporters in a tweet thread on Wednesday, which began with a tribute to her late mother.

“Thank you Mommy, being your daughter remains my proudest title,” Pressley tweeted, along with a photo of her visiting her mother’s gravesite.

Tlaib, who is Palestinian-American, became one of the first two Muslim women elected to Congress in 2018, along with Omar.

She thanked her supporters in a tweet on Wednesday morning, writing, “I will never back down because you deserve someone who won’t sell you out and will always stay #rootedincommunity.”

Meanwhile Omar, who was the subject of aggressive and Islamophobic attacks from Trump and some of his supporters, easily defeated Republican Lacy Johnson in Minnesota’s 5th district race.

Omar, who largely relied on small grassroots donations in her race, faced a tough primary challenge from a well-funded opponent earlier this year that spotlighted the fight against big money in politics.

Nevertheless, she won one of the most closely-watched and most expensive primaries in Minnesota, capturing 57.4% of the vote.

As the four congresswomen return to the U.S. Capitol this winter, their group could be joined by a new member — Democrat Cori Bush, who won her election Tuesday night and is set to become the first Black woman to represent Missouri in the U.S. House.

Bush has already met with other women of color in Congress, including Tlaib and Ocasio-Cortez, to help guide her in her new role as a congresswoman.