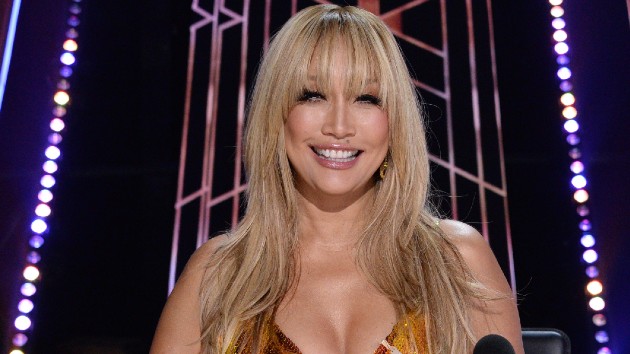 (LOS ANGELES) — With Dancing with the Stars entering the final episodes of the season, judge Carrie Ann Inaba says this is typically the time she starts giving tough love to the competitors, which can be harsh.

However, a new problem has arisen.  Some fans of the show claim that Inaba, who has been with the show since its 2005 premiere, is treating several contestants unfairly — namely The Bachelorette star Kailtyn Bristowe.

On Monday night’s episode, Inaba deducted points from Bristowe and dancing partner Artem Chigvintsev for performing a lift during their jive, which goes against show rules.

That, in turn, sparked rumors that the 52-year-old, who once dated Chigvintsev, is taking her jealousy out on Bristowe.

Inaba spoke out about the rumors while filming an episode of The Talk on Tuesday, calling it a form of bullying.

“Right about this time is when people start to bully me because of the way I judge people,” she lamented. “I can’t believe it still happens as adults.”

Inaba, co-hosts the talk show, added that the bullying won’t “make me change the way I judge.”  In fact, it only steels her resolve to speak honestly to the contestants.

“I’m not about to change because you try to bully me. It only makes me stand stronger in my convictions and what I believe in,” Inaba quipped. “I judge the way I judge from my background.  That is my job to do it and I will always do it based on my own conscience, not because you’re trying to tell me what to do.”

Besides serving as a judge on DWTS for the past 15 years, Inaba served as a backup dancer on In Living Color, as a featured dancer during Madonna’s Girlie Show World Tour and performed at Prince’s Glam Slam.