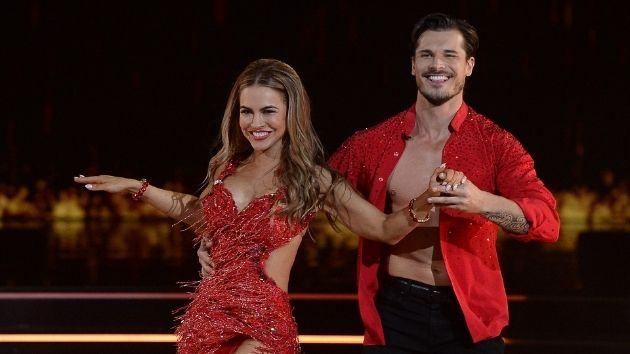 (LOS ANGELES) — With The Real host Jeannie Mai forced to withdraw from the competition due to emergency surgery, competitors weren’t staring down the promised threat of a double elimination on Monday’s Dancing with the Stars.  However, that didn’t ease up the pressure because, also that night, everyone had to master two dances for the very first time.

The additional dance was a relay challenge where couples vied over a potential three extra bonus points for performing a certain dance to the same song back to back.  The competitors were divided into groups of three and were tasked to memorize a new routine to either the cha-cha, Viennese waltz or the samba.

Unfortunately, Selling Sunset star Chrishell Stause wasn’t able to rise above the added challenge and the audience sent her to the bottom two alongside Disney Channel star Skai Jackson.

Judges Carrie Ann Inaba, Bruno Tonioli and Derek Hough, while disappointed over the audience vote, unanimously decided to keep Jackson in the competition.

Rising to the challenge of performing an additional dance, however, were two individuals who earned perfect scores on Monday and ended the night at the top of the leaderboard.

Catfish host Nev Schulman and Olympic figure skater Johnny Weir both earned a final score of 30 out of 30 by not only obtaining the top scores for their first routine, but clinching the maximum amount of bonus points for their subsequent relay challenge.

Schulman danced to two Ariana Grande collaborations on Monday, the first being her duet “Stuck With U” featuring Justin Bieber.  His charismatic Viennese waltz impressed the judges, who eagerly handed him straight nines.

Then, Schulman kicked it up a notch on the ballroom with his vivacious cha-cha to Grande’s collaboration with Lady Gaga, “Rain on Me,” earning three additional points to finish the night with a perfect score.

Weir’s first dance was an extremely smooth foxtrot to Shawn Mendes’ “Wonder” and it dazzled the judges, who readily handed him straight nines, as well.

However, it was the relay challenge where Weir truly shined — a Viennese waltz to Whitney Houston’s “I Have Nothing.”  The figure skater’s raw and emotional mastery of the romantic routine earned him the maximum amount of bonus points, 3, allowing him to join Schulman at the top of the leaderboard.

Another dancer that rose to the double dance challenge was One Day at a Time actress Justina Machado, who was tasked to perform two divergent routines.  The actress’ first performed a lively Samba to “Magalenha” before slowing things down when competing against Weir with her flowing Viennese waltz.  She earned two out of the 3 possible bonus points.

The most emotional moment of the night came when Jeannie Mai spoke directly to fans to express how heartbroken she is that her journey on DWTS ended the way it did.  The television personality explained that she had a throat abscess that became so infected, her throat would have closed up had she not undergone immediate emergency surgery.

“I‘m just so thankful I had the experience on Dancing with the Stars. It was, hands down, one of the best journeys of my life. So thank you so much,” Mai emotionally conveyed to the camera. “I love you guys.”

Dancing with the Stars pays homage to the biggest names in music next week for “Icon Night,” where dancers will perform routines inspired by the most beloved artists in history.  The episode airs next Monday at 8 p.m. ET on ABC.