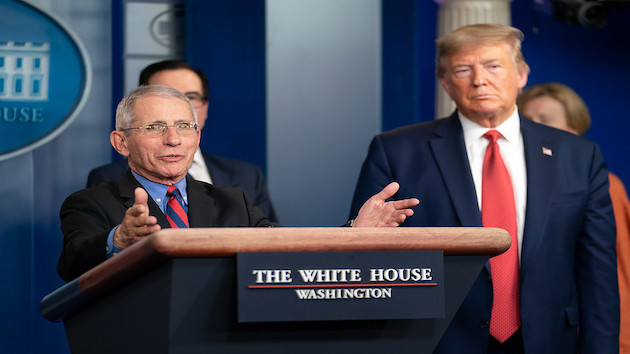 (WASHINGTON) — At a rally Sunday in Opa-locka, Florida, that stretched late into the night, President Donald Trump entertained the raucous crowd with the idea that he might fire Dr. Anthony Fauci, the nation’s top infectious disease expert, after the election.

Trump made the suggestion after his supporters began chanting “Fire Fauci.” It’s a favorite among Trump’s most ardent supporters, who believe the severity of the virus is being overplayed by Fauci and the news media in a bid to undermine the president’s popularity.

As of Monday afternoon, the virus had killed 231,263 Americans, a number public health experts say could be an undercount – not an overcount — because it’s more likely cases are going undiagnosed. The Centers for Disease Control and Prevention says that compared to past years, the U.S. has experienced 299,000 more deaths compared to prior years.

“Don’t tell anybody, but let me wait until a little bit after the election,” Trump told the crowd about firing Fauci.

Such an endeavor, however, would be seriously complicated if not impossible in the near term, even for a norm-busting president.

Fauci is a career civil servant, not a political appointee, and his protected by law from political retaliation. If the president wanted to fire Fauci, he would have to claim some kind of performance problem or misconduct – a tall order for a doctor has served six presidents and is highly regarded among public health experts.

Also, among Fauci’s fiercest defenders is his own boss: Dr. Francis Collins, director of the National Institutes of Health. Fauci, who was highly regarded as a top HIV/AIDS researcher, was named head of NIH’s National Institute of Allergy and Infectious Diseases in 1984 under President Ronald Reagan.

Even if an administrative law judge agreed that Fauci had acted inappropriately, Fauci could appeal that decision before the Merit Systems Protection Board, a federal body that Trump has let languish without enough appointees to establish a quorum and is sitting on a massive backlog of cases.

“He can fire him,” said Max Stier, president and CEO of the Partnership for Public Service, which recently designated Fauci as “Federal Employee of the Year.” “But in my view it’s unlikely to withstand scrutiny.”

Trump’s only path to pushing Fauci out effectively might be an executive order he signed recently that pledges to jumble up some of the 2 million civilian government jobs to allow for more political appointments.

That executive order, which doesn’t take effect until January, promises to create a new category of federal employees that could be fired without cause and without the protections traditionally given to career employees who can appeal wrongful termination. The order would allow agency heads to recommend employees that work on policy to be put into this new category, called “Schedule F.”

Stier and other experts warn the executive order would create a kind of “spoils” system, in which loyalists to a politician would be rewarded with government jobs they might not be qualified for.

“It would turn our government into a creature of the president’s personal will, rather than the public’s interest,” Stier said.

Tim Stretton, a policy analyst at the government watchdog group Project On Government Oversight, agreed. He said he thinks the order could pave the way for Trump to fire Fauci or other federal employees who have criticized his policies.

“I just think doing this right now is very arbitrary and given the president’s comments just last night when you match it up to two weeks after this (executive order) came out it seems really suspect,” Stretton told ABC News.

Fauci’s assessment on the virus is often entirely at odds with the president, who insists repeatedly the nation is “rounding the corner.” In an interview with The Washington Post on Friday, Fauci said he hasn’t spoken with the president since Trump called him from Walter Reed National Military Medical Center, where the president was being treated for COVID-19.

“We’re in for a whole lot of hurt. It’s not a good situation,” he told the Post. “All the stars are aligned in the wrong place as you go into the fall and winter season, with people congregating at home indoors. You could not possibly be positioned more poorly.”

The White House issued a statement accusing Fauci of “playing politics” ahead of the election.

“It’s unacceptable and breaking with all norms for Dr. Fauci, a senior member of the President’s Coronavirus Taskforce and someone who has praised President Trump’s actions throughout this pandemic, to choose three days before an election to play politics,” said White House spokesperson Judd Deere in a statement released to reporters on Sunday.

Trump frequently claims that Fauci was wrong about wearing masks. In the first few weeks of the pandemic, Fauci and other health officials discouraged people from buying masks when healthcare and nursing facilities feared acute shortages. It also wasn’t understood at the time that a large number of people transmitting the virus were asymptomatic.

Fauci, 79, is well past the age of retirement for most Americans. He insists though he isn’t going anywhere no matter who is elected because he wants to see the pandemic through.

Earlier this year, billionaire businessman David Rubenstein, co-founder of the large private investment firm The Carlyle Group, said he tried years ago to lure Fauci into the private sector – an offer that would have been considerably lucrative for a government worker.

“He quickly said no — money did not motivate him, serving the country did. And he stayed at NIH — to the country’s good fortune,” Rubenstein wrote earlier this year in an opinion article defending Fauci’s reputation in USA Today.

If Trump does try to push Fauci out of government, it’s likely any politically motivated ouster would only further increase his visibility and popularity among much of the nation.

Trump has seemed to acknowledge as much in an all-hands phone call with his campaign staff last month.

“Every time he goes on television, there’s always a bomb. But there’s a bigger bomb if you fire him,” Trump told the staff.