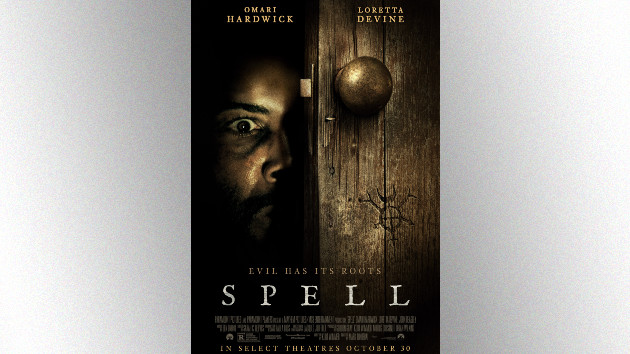 Courtesy of Paramount
Posted on October 30, 2020 by ABC News

In the film, Hardwick plays Marquis, a father held hostage in rural Appalachia by a Voodoo priestess, played by Devine. Hardwick tells ABC Audio that because he and Loretta were fairly new to the horror genre, they quickly developed a “trust of each other” to help them ease into the “dark” places.

“We were virgins to it,” Hardwick says. “She was definitely a virgin being seen as a bad guy, as the antagonist. I was not. So, I had to hold her hand a bit. And in between takes literally grounding her.”

It was during those breaks that Hardwick says he and Devine found levity.

“We were finding laughter and a lot of joking in between takes. That was the best,” he says, comparing their experience to those of essential workers who “see so much gore” and laugh “to remain sane.”

Still, Hardwick says he found “Loretta’s crazy… funny” personality refreshing and a perfect match for her character of Eloise. Devine agrees, adding that her role wasn’t too much of a stretch since she grew up with similar superstitions.

“I would say that this is a tribute to my grandmother because some of the things that happened in the movie she used to scare me with when I was very little,” Devine says. “Things like being born with a cover over your face, [which meant] that you had magical powers.”

While Devine says she found the film “scary” and her character mysterious, she says she’s glad she was up for the challenge.

“It was exciting because it’s so different from what I’m usually known for,” she says. “And, that’s sort of like my go to thing of late.

Spell is in select theaters and available On Demand.