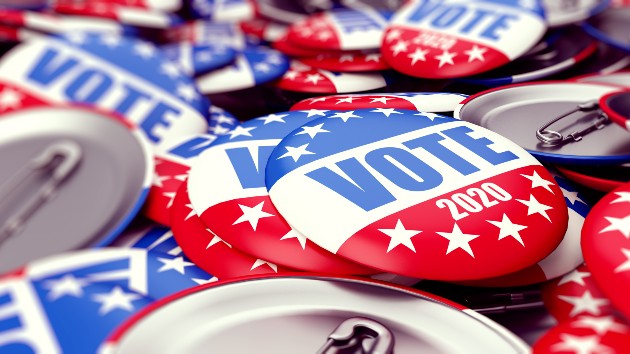 Friday brings both Trump and Biden to Minnesota and Wisconsin, revealing how crucial the states are to both campaigns, with the contest overshadowed by coronavirus cases rising there and in nearly every battleground state.

The president’s aggressive, defensive strategy — visiting states he won in 2016 including a first stop in Michigan Friday afternoon — comes as polls show him trailing nationally and in swing states key to his reelection hopes. Vice President Mike Pence returns to Arizona for a pair of rallies in Flagstaff and Tucson.

Biden will see his busiest travel day to date of the general election. With a stop in Iowa too, it’s the first time the former vice president has made plans to campaign in three states in one day for the 2020 cycle. Running mate California Sen. Kamala Harris is in Texas as Democrats play offense and sense an opportunity to snatch the GOP-stronghold for the first time in more than four decades.

Here is how the day is developing Friday. All times Eastern:

As the country enters what many scientists are calling a new wave of the coronavirus pandemic and the presidential candidates make their final pitches to voters in battleground states, here’s an update of the COVID-19 situation in 13 states ABC News rates as competitive for the presidential election (either toss-ups, leaning Democrat or leaning Republican).

Just before he boarded his plane with his granddaughter, Maisy, the former vice president took a quick question from the press about why he was visiting Minnesota, a state Democrats won by 2.5 points in 2016, and if that signaled concern about the state.

Biden will now head out for Iowa — a state Trump won in 2016 by nearly 10 points and one Biden hasn’t seen since the Iowa caucuses — his first of three stops in the Midwest Friday.

In a final push to encourage early voting, Harris County, the state’s most populous county which includes Houston and the surrounding area, kept eight locations open for 24 hours. The 24-hour period started Thursday morning. Between 7 p.m. Thursday and 7 a.m. Friday, 10,250 people voted there.

Friday is the final day Texans can vote early in the 2020 election. It comes as California Sen. Kamala Harris takes to the GOP-stronghold for the day as Democrats sense an opportunity — though a long shot — to win the state’s 38 electoral votes.

Heading into the final weekend before Election Day, both candidates are doing a final blitz through the battleground states they hope will determine the outcome of the race in their favor — but the barnstorming comes as coronavirus cases rise in every competitive state they’re vying for.

Friday brings the candidates to Minnesota and Wisconsin — revealing the importance both campaigns are placing on those states. Trump also stops in Michigan — where Biden will campaign on Saturday with former President Barack Obama — and Biden will also take to Iowa — a state he hasn’t seen since the Iowa caucuses and one that Trump took in 2016 by nearly 10 points.

Trump’s and Biden’s campaign events in the homestretch have also illustrated their different outlooks on the coronavirus pandemic, with Trump insisting to packed crowds of mostly maskless supporters that the virus is disappearing, while Biden has acknowledged the pandemic will continue even if he’s elected and has repeatedly thanked his supporters for wearing masks and social distancing at his drive-in rallies.

But Trump’s rally in Minnesota Friday afternoon may change that trend and force the president to face the realities of the pandemic.

In the first time the campaign has limited attendance at a rally in accordance with local COVID-19 guidelines, the Trump campaign will allow just the first 250 people in line to attend Trump’s rally in Rochester, Minnesota, due to restrictions by the governor to control the virus, which the campaign called “free speech-stifling.”

The weekend blitz comes after the candidates converged in Florida Thursday to court the Latino vote and in which each offered conflicting realities of COVID-19 at their dueling rallies down the I-4 corridor. The weather threw both of them curve balls by the evening with Biden’s second Florida rally being cut short due to rain and Trump’s North Carolina rally also scrapped due to weather.

The vice president and vice-presidential candidate, too, are out on the trail with Republicans on offense — defending the map that led them to victory in 2016 — and Democrats seeking to expand theirs.

California Sen. Kamala Harris travels in Texas as Democrats play offense and sense an opportunity to snatch the GOP-stronghold for the first time in more than four decades. Vice President Mike Pence, meanwhile, has two rallies in Arizona — a state Trump won in 2016 by four points.

With just four days to go and more than 82 million votes already cast, time is running out for Trump and Biden to sway voters.

Biden’s campaign has announced that he will be spending at least part of the last 72 hours in the 2020 race in Pennsylvania — an indication of just how important Democrats believe the Keystone State will be in determining a winner.

On Sunday, Biden will travel to Philadelphia to “discuss bringing Americans together to address the crises facing the country and win the battle for the soul of the nation.”

On Monday, Biden and former second lady Jill Biden, along with Sen. Kamala Harris and her husband Doug Emhoff, plan to “barnstorm” the state, spreading out across all the four corners.

Biden’s speech on Sunday offers a bit of a full circle moment for the former vice president, who held his “campaign launch rally” in Philadelphia on May 18, 2019, and laid out his campaign vision for unifying the country in the remarks just under a month after launching his third run for president.

Pennsylvania is by far the state Biden has visited the most in the 2020 general election and one that holds a particular importance to him.

“I’m going to win Pennsylvania. It’s a matter of a great deal to me, personally as well as politically,” Biden told reporters Monday.

Trump will take to Pennsylvania Saturday for three rallies, and he’s still planning to barnstorm nearly a dozen events in the final 48 hours across states he carried in 2016.

FiveThirtyEight currently places Pennsylvania as the likeliest “tipping-point state” in its forecast or the state that could determine the winner of the Electoral College.

See a life-sized house made of candy come to life on Hulu’s ‘Candified: Home for the Holidays’
Neuropsychologists call for elimination of race-norming in clinical tests following NFL concussion controversy
Texas law restricting access to abortion pills goes into effect: What to know
Strangers donate breast milk after mom of newborn dies of COVID-19
COVID-19 live updates: First omicron case in US identified in California
“It’s the moment I’ve waited for my entire life”: Michael B. Jordan takes the reins of his career, and ‘Creed III’