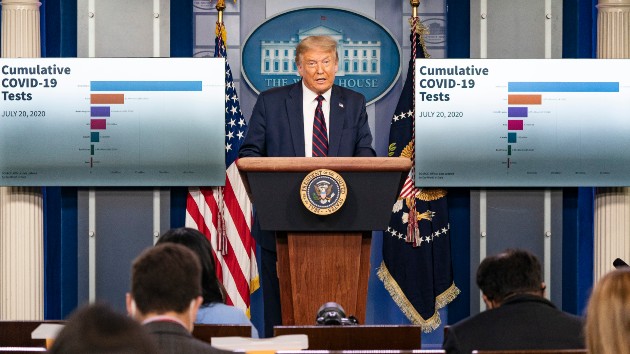 (WASHINGTON) — In a bizarre twist on the Trump administration’s handling of the pandemic, House Democrats have released documents detailing a $250 million plan by political aides at the Department of Health and Human Services to seek out celebrities to talk about COVID-19 — and it appears their politics might have mattered.

Among the documents kept by a government contractor hired to run the public health campaign was a list of the political leanings of some 274 celebrities, including their positions on gun legislation, abortion rights and same-sex marriage.

Oscar winner Julianne Moore, for example, was marked down as “pending” in participation, and noted as a “Liberal Democrat, pro-choicer, LGBT rights supporter, gun control campaigner.” The Office actor John Krasinski was listed as a “maybe” with the note that the “team is checking with him; has some conservative political views.”

A public service campaign wouldn’t be unusual in a nationwide pandemic, and some government documents show one intention was to use credible sources to educate Americans on masks, social distancing and vaccination. The documents released by the Congress also don’t allege any wrongdoing by the celebrities. It’s not clear many of the celebrities were even aware they were being vetted for the campaign.

But that list — called the “PSA Celebrity Tracker” — along with notes following meetings with administration officials, raises serious questions about whether taxpayer money was being used to educate the public on a deadly virus or bolster President Donald Trump’s reelection chances by voicing support for him.

Trump has falsely claimed since spring that the virus would “go away” and has declined to wear a mask in public, eventually testing positive.

“Helping the President will Help the Country,” one contractor wrote down as a potential “theme” of the campaign after meeting with Michael Caputo, a Trump appointee and top communications official at the Department of Health and Human Services at the time. Caputo is on temporary leave, citing medical reasons.

Other themes listed were “Keep America Well” and that COVID-19 was the “public health challenge of all time.”

Politico first reported on the potential $250 million proposal last August, obtaining a letter from the administration to a communications firm that stated the goal of the contract would be to “defeat despair and inspire hope” about the coronavirus pandemic.

An HHS spokesperson said Thursday that the program was undergoing a “strategic review.”

“The plan has always been to only use materials reviewed by a department-wide team of experts including scientists from CDC who will ensure the latest scientific information is used to provide important public health, therapeutic and vaccine information,” according to the HHS statement.

The list of celebrities doesn’t make clear the extent to which their political views factored into their potential involvement in the program, such as the assessment of Krasinski.

But other documents obtained by the House Oversight and Reform Committee suggest their political leanings did pose problems, such as when it came to comedian George Lopez, a vocal supporter of Democrat Joe Biden and target of conservatives.

“George Lopez PSA – Not moving forward due to previous concerns regarding his comments regarding the President,” said meeting notes from Sept. 29 logged by contractor Atlas Research.

Any celebrities considering participation have since backed out of the campaign, according to Democratic investigators.

“Of course, it is completely inappropriate to frame a taxpayer-funded ad campaign around ‘helping’ President Trump in the weeks and days before the election,” wrote House Democratic chairs Carolyn Maloney, Jim Clyburn and Raja Krishnamoorthi in an Oct. 28 letter to Health Secretary Alex Azar.

“This theme also ignores the reality that more than 220,000 Americans have died from coronavirus — a fact that should not be whitewashed in a legitimate public health message,” the House Democrats stated.

In an Instagram video, Quaid said he taped an interview with Dr. Anthony Fauci, the nation’s top infectious disease expert, to raise awareness about the importance of wearing a mask and social distancing.

“It was in no way political,” Quaid said on Instagram, blaming “cancel culture media” for the effort’s demise.

Winans has also said her involvement was not political. Lemmer said Thursday that he agreed to participate in the interest of unity.

“To my understanding and knowledge, this project had no political affiliation nor was it ever mentioned before, during or after my involvement,” he wrote in an email to ABC News.

Other celebrities couldn’t be immediately reached for comment. Moore’s publicist said he was not aware of the list, but confirmed the actress is a Democrat who supports LGBTQ and abortion rights as well as gun safety legislation.

Earlier this year, Caputo, the political appointee who led the effort as a top communications official at HHS, denied the program was aimed at giving Trump a political boost: “This project is about public health, not politics, and America deserves no less.”