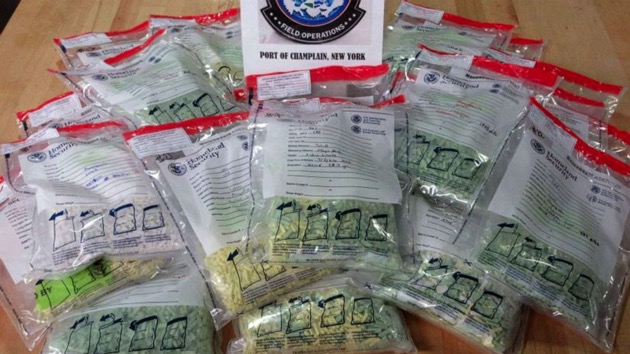 (NEW YORK) — In September, according to authorities, Pascale Ferrier sent letters to President Donald Trump filled with ricin, and a few days later she was arrested at the northern border with a firearm.

That weapon was one of 142 firearms Customs and Border Protection (CPB) officers on the northern border seized coming in and out of the country this year, representing a nearly 30% increase over the number of weapons seized in 2019, according to the agency.

“The movement of any type of firearms — whether it’s coming into the United States or into the country on the black market — is obviously for criminal organizations, and that is a major concern,” Aaron Bowker, supervisory CBP officer and public affairs liaison for the agency’s Buffalo Field Division, told ABC News.

Customs and Border Protection also saw an increase of cash, drug, and ammunition seizures along the northern border during fiscal year 2020, according to statistics released by the agency on Thursday.

In total, CBP seized 42,000 pounds of drugs coming into the country from the north. The majority of those drugs were marijuana, which saw almost a 1,000% increase over 2019. Cocaine seizures were also up 125% from last year and heroin seizures were up 72%.

“The legalization of marijuana in Canada has led to an overproduction of marijuana and subsequently, because of the current street value in the United States, it’s led to criminal organizations attempting to ship that in to make a higher profit on their product,” Bowker said.

“The surge in narcotics and firearm seizures across the northern border is the result of strong partnerships between Homeland Security Investigations (HSI), CBP, and Canadian law enforcement,” said Kevin Kelly, Special Agent in Charge of HSI Buffalo. “It is also an indication of the growing organized crime elements attempting to exploit the U.S. and Canadian border for illicit gain and that pose a significant threat to our communities.”

CBP Buffalo Field Office Director Rose Brophy lauded the agency’s officers who have been working through the pandemic to make those seizures despite the public health crisis.

“They continued to enforce our laws and intercepted thousands of pounds of narcotics, seized large amounts of unreported currency related to criminal organizations, took hundreds of firearms and criminals off of our streets, and intercepted hundreds of pests that can cause irreversible damage to our environment and economy,” Brophy said.

“Through our Border Enforcement Task Force (BEST), HSI is committed to the deployment of its investigative resources and to the multiagency collaboration needed to dismantle the transnational criminal organizations exploiting our shared border,” Kelly said.