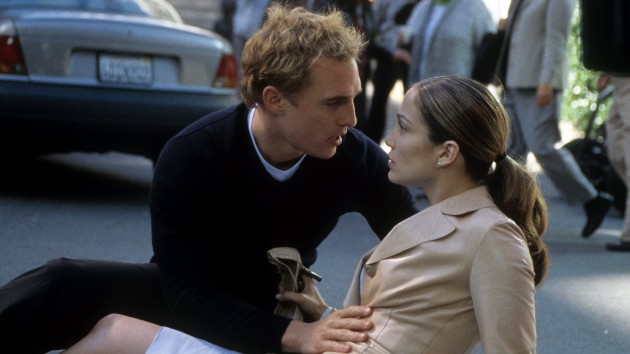 (NEW YORK) — Jennifer Lopez has starred in quite a few romantic comedies and it all started with The Wedding Planner — but in a new interview she recalls that it almost didn’t happen.

Speaking with her business partner and agent, Elaine Goldsmith-Thomas, for Variety’s Power of Women Conversations presented by Lifetime, Lopez recalled how she had to fight in order to not be typecast and land the leading role in the 2001 box office hit.

“When I started in the industry, I remember we talked about that I would always go in for what they would call the maid, the dishwasher. I was like, ‘I don’t want to do that,"” she said. “I had to kind of break out of that, and convince somebody to put me in the first romantic comedy, which was The Wedding Planner.”

The 51-year-old singer and actress admitted that,after receiving some pushback over what she was to be paid, ultimately, it was director Adam Shankman who secured her role alongside Matthew McConaughey.

“You were my agent, and you were asking for a certain price that you thought I merited, and they were buckling back,” Lopez explained. “Then [Adam] came to one of my record signings, and he said, ‘Give her whatever she wants."”

“The idea that somebody like me, from my background, who was a woman, could garner that type of, you know, price in this industry. It was a big deal,” she added.

Lopez has since gone on to star in more romantic comedies like Maid In Manhattan, Monster-In-Law, The Back-up Plan, and more. She will next appear in the romantic comedy Marry Me, which also stars Maluma and Owen Wilson.  The movie is slated to open in theaters February 12, 2021.

Keke Palmer shares she has PCOS: Here’s what to know about it
Report: 2021 Oscars to buck the virtual trend and proceed as an “in-person telecast”
Coronavirus live updates: Vaccinations to begin in Russia next week, Putin says
Former astronaut Mark Kelly to be sworn in as Arizona’s newest US senator
Freeze warning and wind chill alerts in Florida, new snowstorm for Central US
Amid COVID-19, moms leaving the workforce could have lasting impact on economy