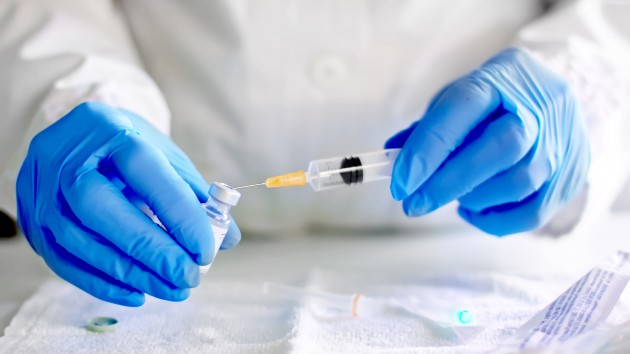 (NEW YORK) — Tens of millions of COVID-19 vaccine doses are reportedly being manufactured and stored in several facilities around the country. Pfizer and Moderna will allegedly have somewhere between 20 million and 40 million doses of their vaccine stockpiled by the end of December, Operation Warp Speed’s chief adviser, Dr. Moncef Slaoui, told ABC News last week.

Their vaccine candidates could also be two of the first to be granted emergency use authorization from the Food and Drug Administration, which they claim may come as soon as mid-December as both companies near completion of their late-stage clinical trials.

Distributing the first wave of doses will be a massive undertaking by both private and government entities alike, including the military. The current plan only lays out the first few months of distribution, with nursing homes and long-term care facilities slated to receive the first doses.

Private companies will deliver the vaccine, not the military

The military will likely handle logistics and not directly deliver vaccine vials, despite President Donald Trump’s recent claims. Instead, FedEx and other private delivery companies will take on the task.

“There will not be this vision that some people have that there’ll be Army trucks driving through the streets delivering vaccines,” Army Gen. Gustave Perna, chief operating officer of Operation Warp Speed, said at a press conference Tuesday. “That’s not feasible or the right way to do it.”

Operation Warp Speed is a program created to accelerate a vaccine rollout without sacrificing safety, the Trump administration said. It has pumped billions of dollars into numerous pharmaceutical companies in hopes of developing one or more safe and effective COVID-19 vaccines. The funding was initially intended to help ramp up development, but a recent deal with Walgreens and CVS aims to hasten and coordinate distribution as well.

Roughly a third of COVID-19 deaths in the U.S. have occurred among residents of long-term care facilities. CVS claims it’s prepared to begin administering COVID-19 vaccines in those facilities before the end of the year if one is approved.

As part of the recent deal between Operation Warp Speed, CVS and Walgreens, facilities that opt into the program will have pharmacists and technicians come and administer vaccine doses on-site — free of charge to residents and staff.

“Ultimately, we’re going to be looking to get to every nursing home that signs up with us as a partner within a three week period,” Chris Cox, senior vice president of CVS Health, told ABC News. “It is a huge undertaking, but it’s also well within the scope of what CVS already does.”

If a facility decides not to opt-in to the program, it will need to find a way to offer the vaccine through other sources, such as local pharmacies that have been approved as vaccinators by state or local jurisdictions to administer the vaccine.

CVS and Walgreens were selected because they have the broadest reach from a geography perspective, according to Operation Warp Speed officials. These two companies already support more than 35% of long-term care facilities nation-wide — but Cox Claims CVS is prepared to surpass that estimated reach.

“The exact percentage that we end up with is still to be determined, but we are preparing and will be ready for as much as 50-60 percent in the event that it were to come to that,” Cox said.

Each COVID-19 vaccine in development has its own set of storage and transportation requirements. Pfizer’s vaccine candidate, for example, must be stored at below 80 degrees Celsius.

“We start off very conservative and we say to ship at this temperature — where we have proven that the vaccine is safe and or the vaccine is safe in terms of not degrading,” Phil Dormitzer, vice president and chief scientific officer of viral vaccines at Pfizer, told ABC News.

However, Cox says all CVS pharmacies are equipped with refrigerators and freezers that would allow them to store Pfizer’s vaccines. As for transportation, Pfizer will use refillable dry ice containers.

“We call them pizza boxes because they have roughly that shape full of vaccine and they’re packed around with dry ice in these very insulated containers,” said Dormitzer. “Once you get to the point where they’re going to be used, that can be taken out of the dry ice, put in the refrigerator for five days — so there’s some flexibility on when the vaccine can be used.”

“We’re going to make this effort once we get to a general population stage, an appointment only type of model,” said Cox. “It will allow us to ensure that we don’t have more people lining up for a vaccine than we actually have in stock — but we’re going to try to make that appointment capacity as large as possible.”