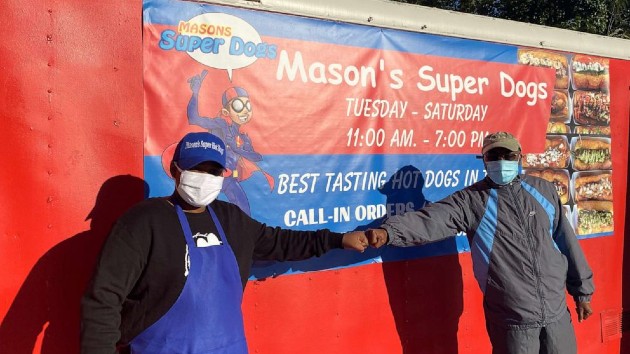 (NEW YORK) — At 14 years old, Mason Wright has become a restaurant owner and is setting his sights on a future franchise.

“I want to have restaurants all over the place like McDonald’s,” Mason told ABC News’ Good Morning America.

With the help of his family, the eighth grade entrepreneur opened Mason’s Super Dogs in Stonecrest, Georgia, in October. The restaurant specializes in creative hot dogs and vegan hot dogs, which are plant-based and were named one of the best vegan hot dogs in the country by PETA.

It’s been Mason’s dream to have a brick-and-mortar restaurant ever since he started his hot dog food cart in 2017. At the time, Mason was hunting for a job to make some spending money, but said he was turned away because he was “too young.”

“Every time we went to the grocery store I asked for a job. And they all said, ‘No, I was too young.’ That’s when I started telling myself, I can be my own boss instead of working for someone else and giving them money,” Mason said.

Mason said he took the money he earned from walking dogs, washing cars and mowing lawns and invested it in a small, red food cart. He opened up shop on the Morehouse College campus in Atlanta in 2017 and began to sell hot dogs.

When the coronavirus pandemic hit in March and the campus was shut down, Mason’s business was tested like countless others in the food industry.

His 22-year-old sister, Mary-Pat Hector, became his biggest financial supporter and advocate to get Mason his own business license.

“Our family has really put their entire lives on hold to support and make sure that his dreams come to fruition,” Hector told GMA.

Despite the setback, with the help of mentors and his older sister, Mason was inspired to make his vision of his own restaurant a reality.

After months of red tape, Mason was able to get his own business licenses to open his restaurant. Since opening on Oct. 17, Mason said he has sold more than 500 hot dogs almost every single day and has sold out on numerous occasions.

“Having a brother like Mason is amazing because he’s a visionary and literally everything that he puts his mind to, he does, and it ends up being successful,” Hector said.

For now, Mason has full-time staff, works when he is not in school and does homework in his spare time at the restaurant.

Mason said he hopes to inspire other kids to follow their dreams and become entrepreneurs, like him.

“Do what you’re good at,” he said. “Because you can turn your hobby into a business that makes you money.”

Elected officials criticized for not following own COVID-19 advice
15-year-old victim hides from police in trunk of vehicle with dogs
Meadow Walker honors her late father on seventh anniversary of his death
Celebrity Chef David Chang wins ‘Who Wants to be a Millionaire”s top prize for restaurant workers hurt by COVID-19
Michael B. Jordan, Viola Davis and others honor Chadwick Boseman on what would’ve been his 44th birthday
Dialing into Pennsylvania GOP meeting, Trump shows no sign of concession