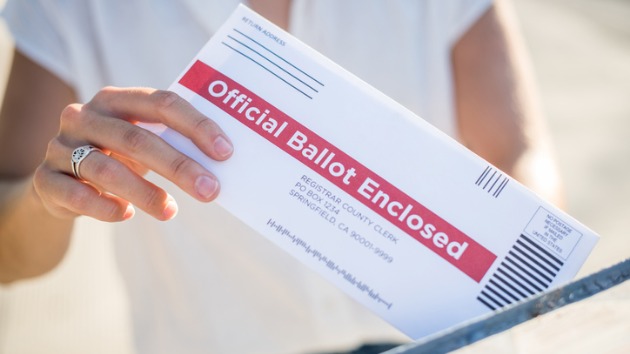 The historic surge of mail-in ballots in 2020 means slope, slant and pen lifts in voter signatures could pose a major new flashpoint in the tabulation of election results.

“There will be partisan challenging of signature verification and signatures in the days following the election in many states. We can prepare ourselves for it now,” said Tammy Patrick, a senior adviser at the Democracy Fund, a nonpartisan election advocacy group.

Mail-in ballots in every state must arrive with a voter signature on the envelope in order to be counted. Dozens of states perform an analysis of those signatures to make sure they match a real voter on file.

ABC News got an exclusive look at how election officials in Washington, D.C., perform signature verifications before mail-in ballots are counted. Trained staff manually inspect each handwritten script and visually compare it to an electronic version associated with the voter’s driver’s license or other official record.

“If it’s not that as signed, then we have a process where we notify the voters,” said D.C. Board of Elections executive director Alice Miller. “They can cure it. They have so much time to cure it. And we send them a document, they can sign it and send them back to us.”

Watch ABC News Live Prime at 7 and 9 p.m. ET for an exclusive look at how election officials in Washington, D.C., perform signature verifications before mail-in ballots are counted.

Twenty-two states notify voters and give them a chance to cure, or fix, ballot signature defects within a few days of the election, according to the Brennan Center, a nonpartisan law and policy institute. But 28 states — including the key battlegrounds of Michigan and Wisconsin — do not.

“We often say one vote, every vote, matters and counts. And sometimes that vote can really make an impact more than at other times,” said Patrick. “We need to make sure that every eligible American has their ballot counted even if they didn’t cross a ‘t’ or forgot to dot an ‘i."”

An ABC News analysis of the last two election cycles found more than 750,000 mail-in ballots were thrown out nationwide — many for not having a valid signature, or for arriving late. During this year’s primaries, more than 500,000 were tossed for the same reasons.

“Individuals who are inexperienced with mail voting tend to have their ballots rejected at higher rates,” said Dartmouth College government professor Michael Herron, who specializes in quantitative analysis of voter behavior. “It’s a pretty big bump and that’s an important thing right now because so many people are new to voting by mail.”

“Sadly, what we have found is that signatures may vary for all kinds of reasons: someone’s age, someone may have had a stroke, somebody may be just moving too fast,” said Kristen Clarke, executive director of the Lawyers’ Committee for Civil Rights Under Law, a leading nonpartisan voter advocacy group. “In those instances, we’re really pushing officials to give voters notice and an opportunity to cure any issue that you may have identified.”

While several states have detailed guidelines for signature matching, others do not, leading some experts to worry that a subjective analysis of a voter’s handwriting could unfairly compromise their vote.

“Staff are under-trained, they’re under-resourced, and they’ll be under tremendous pressure to get results quickly and they’re moving through thousands or millions of signatures in the state,” said Brennan Center attorney Raul Macias. “To verify signatures very quickly, mistakes can happen.”

One analysis conducted by Carroll College political scientist Alexander Street estimates a 97% likelihood that a ballot rejected for an unsuccessful signature comparison should have been counted.

The findings are one reason why the Pennsylvania Supreme Court last week unanimously ruled that no ballots can be thrown out this year over an alleged signature mismatch. A federal judge in South Carolina ruled Tuesday that that state is also prohibited from rejecting mail-in ballots over an alleged invalid signature.

“If you’re applying online you need to use a state driver’s license or photo ID. If you’re applying for a mail-in ballot via paper application, you need the voter social security number. So there are already multiple steps in the process that prevent voter fraud,” said Bethany Hallam, a member of the Allegehny County, Pennsylvania, Board of Elections. “And, remember if you attempt to commit voter fraud, that’s a felony, and you will be prosecuted.”