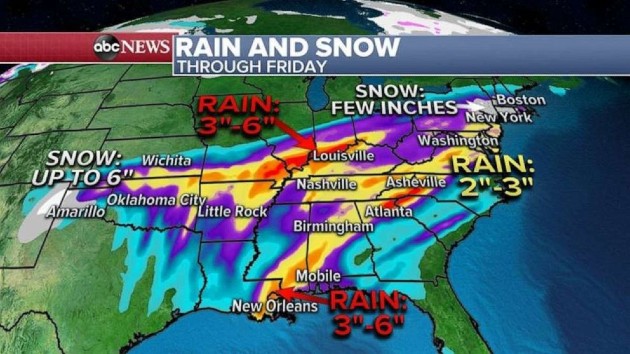 (NEW YORK) — More than 300,000 people are without power overnight as ice storms continue for Oklahoma and parts of northern Texas in what is the earliest ice storm ever recorded in Oklahoma.

Almost 1 inch of ice accumulated in Oklahoma bringing trees down on top of power lines.

As the storm moves east it is expected to combine with remnants of Zeta and bring heavy rain and even the first snow of the season for parts of the Northeast.

Take a look at all the alerts issued for 17 states from New Mexico to Virginia:

As the winter storm and remnants of Zeta combine and move east over the next three days, some areas could see up to half a foot of rain.

Some areas in New Mexico already saw almost 2 feet of snow with an additional 6 inches possible there.

As the combination of the winter storm and Zeta remnants get into the Northeast, the first accumulating snow of the season is expected to fall from Pennsylvania into New York’s Hudson Valley and into Connecticut, Rhode Island and Massachusetts.

Some areas could see several inches of snow, especially in the higher elevations.

Meanwhile, in the West, gusty winds are finally subsiding and all Red Flag Warnings have been allowed to expire.

Even though winds will be lighter, bone dry conditions with dry vegetation will be enough to fuel existing fires as evacuations are still in place for fires burning in southern California.

Director Carl Weathers laughing along with ‘The Mandalorian’ fans about errant “Jeans Guy”
Pete Davidson, Ed Asner and more starring in virtual reading of ‘It’s A Wonderful Life’
As he ignores election defeat, Trump to pardon turkey
Mary Steenbergen says her ‘Happiest Season’ character was very familiar to her
Georgia to begin Trump campaign-requested recount of presidential contest Tuesday
Storm in Central US to bring snow to parts of Midwest