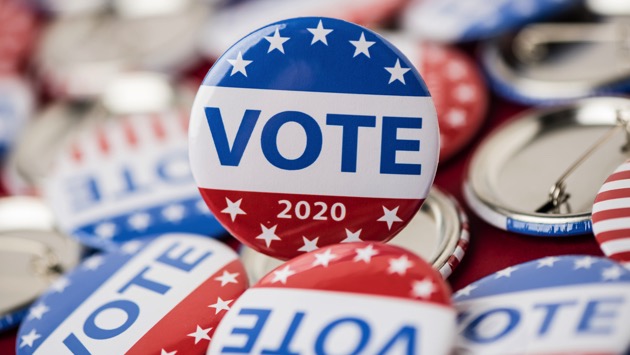 (WASHINGTON) — With six days until Election Day, and President Donald Trump and former Vice President Joe Biden racing toward Nov. 3, more than 71 million have voted early so far — a record.

The president continues an aggressive, defensive campaign as polls show him trailing nationally and in several battleground states key to his reelection hopes. He has back-to-back rallies in Arizona Wednesday.

Sen. Kamala Harris, the Democratic vice-presidential nominee, is also in Arizona making stops in Tucson and Phoenix. Biden will deliver remarks on his plan to beat COVID-19 from Wilmington, Delaware.

Vice President Mike Pence, meanwhile, has campaign rallies in the battleground states of Wisconsin and Michigan.

Here is how Wednesday is developing. All times Eastern:

As Trump continues to downplay the realities of the coronavirus pandemic on his path to re-election, he will pitch himself to Nevada voters this afternoon but he will do it from Arizona — after a rally in the Silver State last month violated coronavirus restrictions and left his campaign with hefty fines.

The shifting of his event, this time, across the banks of the Colorado River to Bullhead City, Arizona, comes as polls show Biden with a nationwide lead, advantage in swing states and with more trust in voters than Trump to handle the coronavirus pandemic.

Trump in a three-state tour Tuesday condemned Democratic leaders in Michigan and Wisconsin for imposing restrictions to combat the coronavirus crisis — and is expected to do the same with Nevada’s governor Wednesday while on Arizona soil, where Republican Gov. Doug Ducey, a close ally to Trump, leads.

But Democrats aren’t ceding the Western states to the GOP. Biden’s running mate, California Sen. Kamala Harris, was in Nevada on Tuesday in an push to prevent the state from flipping to Trump and will campaign in Arizona Wednesday — stopping in the cities of Tucson and Phoenix.

Biden, meanwhile, is off the trail, spending the day in Wilmington, Delaware. He’s expected to receive a virtual briefing on the pandemic from public health experts, then give a speech on protecting health care and his plan to tackle the coronavirus crisis.

Democrats are playing on the offense in the homestretch — focusing on states that Trump won in 2016. Biden took a trip to the red state of Georgia Tuesday and has plans to visit Florida, Iowa, Wisconsin and Michigan later this week. Trump’s pitch to Nevada voters, where Clinton won by less than 2.5 percentage points, shows the campaign thinks the state’s six electoral votes are within reach.

A surge in coronavirus cases has damaged Trump’s re-election campaign in Wisconsin, with growing criticism of his work on the pandemic and preference for Biden to handle it. Biden holds a slighter advantage in Michigan, with sizable leads among women, moderates and independents in ABC News/Washington Post polls in both states.

Biden leads Trump by 57-40% among likely voters in Wisconsin, a state that’s now reported to be third in the nation in per capita COVID-19 cases, with a 53% increase in average daily cases in the past two weeks, a record number of hospitalizations and a 112% jump in deaths. That compares with a closer 52-46% in mid-September.

In Michigan, it’s 51-44%, Biden-Trump, among likely voters, a slight Biden lead in this poll produced for ABC by Langer Research Associates.

Oct 28, 10:46 am
Ahead of Arizona rallies, Trump’s testing czar directly contradicts him on testing

Adm. Brett Giroir, a member of the White House coronavirus task force who was charged with leading the country’s testing efforts at the beginning of the pandemic and has been careful not to break from the White House message, directly contradicted the president this morning when he acknowledged U.S. coronavirus cases are on the rise — and not due to testing.

Trump said Tuesday, as he has throughout the pandemic, that the virus is going away and cases are rising due to increased testing — but Giroir countered both of those points and warned “Draconian measures” may be required “if we don’t make a change.”

“We do believe and the data show that cases are going up. It’s not just a function of testing,” Giroir said in an interview this morning on NBC. “Yes, we’re getting more cases identified, but the cases are actually going up. And we know that, too, because hospitalizations are going up.”

“It’s not just a function of testing,” Giroir added, calling the current moment a “critical point” in the country’s pandemic response. He went on to remind Americans to practice social distancing, wear a face mask and avoid crowded, indoor spaces — CDC guidelines which the Trump campaign itself has scantily adhered to.

“If we don’t do those things, it may force local officials or government officials in the states to have more draconian measures because cases will go up if we don’t make a change,” Giroir warned. “The virus isn’t acting on its own.”

Covid, Covid, Covid is the unified chant of the Fake News Lamestream Media. They will talk about nothing else until November 4th., when the Election will be (hopefully!) over. Then the talk will be how low the death rate is, plenty of hospital rooms, & many tests of young people.

The president has increasingly sought to tune out that reality as he holds mass gatherings day-after-day in the final stretch of his campaign, including in some of the hardest hit states. At those rallies, Trump has lamented over media coverage of COVID-19, claiming the coverage is intended to hurt his reelection chances. It comes as the U.S. reported a record of more than 500,000 new cases over the past week alone.

There’s a reason, of course, for the coverage. And new ABC News/Washington Post polling out Wednesday morning shows how extensively COVID-19 perceptions are impacting the race — particularly in a few states that are likely to matter the most.

Biden leads Trump 57-40 among likely voters in Wisconsin, and 52-46 in Michigan. That’s a sizable lead with less than a week to go in both critical states, with the Wisconsin number striking on its own because it shows a larger margin than other recent polls.

One thing that is driving the story in Wisconsin, in particular — the pandemic. The state is in the midst of a full-on coronavirus crisis, setting new records for hospitalizations and sitting near the top of the list for per capita cases.

The president is 20 points underwater on his handling of the pandemic in Wisconsin, and Biden is trusted more than Trump on the subject by a similar 20 points. The poll shows Trump’s support among suburban voters cratering in Wisconsin, particularly in comparison to Michigan.

The polling also shows Trump trailing among seniors in Wisconsin by 24 points and in Michigan by 12 points. He carried voters 65 and older narrowly in both states four years ago, according to exit polls.

Biden can win the presidency by rebuilding the blue wall — Wisconsin, Michigan and Pennsylvania — without carrying a single other Trump state. It might wind up being rebuilt with help from the crisis that has defined Trump’s presidency.