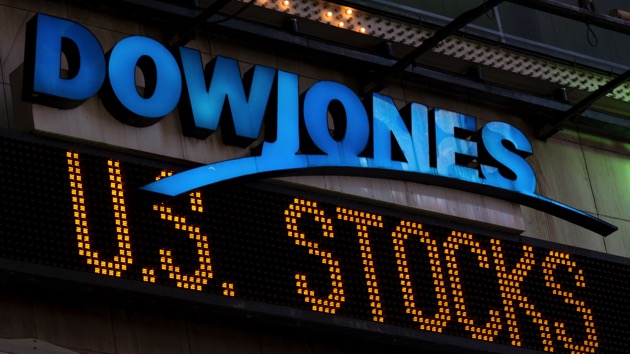 (NEW YORK) — Stocks took a tumble Wednesday amid uncertainty over rising virus cases and with less than a week to go before the U.S. presidential vote.

The Dow Jones Industrial Average plummeted by 943 points, or approximately 3.4%, by the time markets closed Wednesday. The S&P 500 slipped 3.5% and the tech-heavy Nasdaq slid 3.7%.

The sell-off, which began earlier this week, comes amid a new surge in COVID-19 cases in the U.S. Last Friday, some seven months into the crisis, the nation hit a new all-time high of 83,757 new cases in a single day.

Randy Frederick, the vice president of trading and derivatives at Charles Schwab, told ABC News Wednesday that the primary concern among investors has been “this pretty sizable uptick in the virus, more than anything else.”

“It’s not just in the U.S., there have been a surge in cases all around the world with some rare exceptions,” he said. “I think that’s not something people anticipated, I think most people expected it to flatten out.”

“You can’t recover until you start seeing meaningful progress in slowing down the progression of the virus, and frankly, last week, we’ve seen we are not there yet,” Frederick added.

On Tuesday, there were 73,240 new cases identified in the U.S., according to a real-time count kept by Johns Hopkins University. The latest daily tally is nearly 6,500 more than the previous day.

The spike in virus cases and the looming threat of further lockdown measures to quell its spread — that could potentially hit businesses hard — have also fueled the mounting uncertainty among investors. On Tuesday, Illinois announced new restrictions in response to the surge in cases, including banning all indoor dining.

Frederick said that essentially the “clock has run out” for hopes of new stimulus measures being passed ahead of the election.

“The negotiations between Nancy Pelosi and Steven Mnuchin have pretty much been put on hold now that Congress has left D.C., so the odds of any form of new stimulus being enacted prior to election is pretty close to zero,” he said.

“The market tends to move more on what is expected to happen than what is happening, so constant reinforcement from both sides had kept the market buoyant,” he added. “And now, the clock has run out, and I think they’re continuing to say, ‘we’re still negotiating, we’re still talking,’ but the possibility of that occurring before the election is pretty small.”