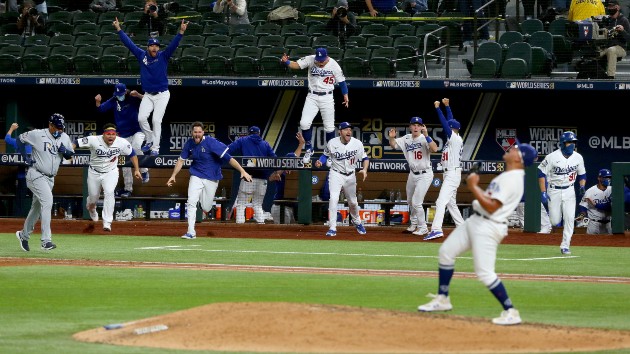 The Dodgers won the series 4-2, their first title in 32 years.

However, the victory was marred by a positive COVID-19 test from third baseman Justin Turner, who was pulled from the bench.

MLB commissioner Rob Manfred confirmed the positive test after the game, telling Fox: “It’s a bittersweet night for us.”

Turner was 0-for-3 with two strikeouts before coming out of the game to start the eighth inning. The team did not give a reason for his exit when he left.

“Thanks to everyone reaching out!” Turner wrote on Twitter after the game. “I feel great, no symptoms at all. Just experienced every emotion you can possibly imagine. Can’t believe I couldn’t be out there to celebrate with my guys! So proud of this team & unbelievably happy for the City of LA #WorldSeriesChamps.”

Sources told ESPN’s Jeff Passan that in the second inning, the lab doing COVID-19 tests informed Major League Baseball that Turner’s test from Monday came back inconclusive. Samples taken from Tuesday then arrived and were run, sources said, and they showed up positive. The league then immediately called the Dodgers and said to pull Turner.

He was replaced in the field by Edwin Rios.

The veteran infielder was not with his teammates as they celebrated the franchise’s first World Series title since 1988. His teammates were wearing masks while on the Globe Life Field infield after the game.

When the Dodgers return to their hotel later Tuesday night, everybody will be given a rapid PCR (polymerase chain reaction) test, sources told Passan.

Hilary Duff reveals she is isolating from family due to COVID-19 exposure
More than 1 million people traveled by plane in the US in one day, despite CDC COVID-19 guidelines
Rain, snow and ice for parts of Midwest to the East Coast
Hospitals nationwide face shortage of medical staff amid spike in COVID-19 cases
Alex Trebek marks World Pancreatic Cancer Day in pre-recorded video message
Donald Trump Jr. tests positive for COVID-19