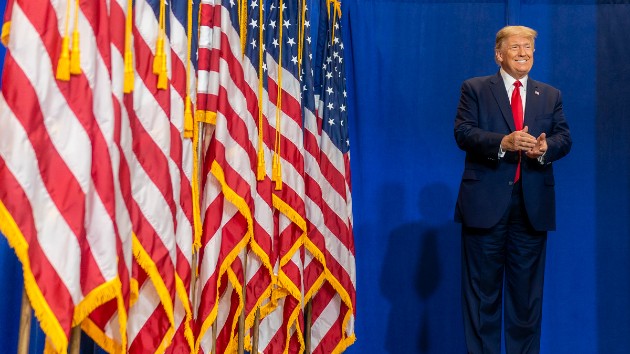 (NEW YORK) — A surge in coronavirus cases has damaged President Donald Trump’s re-election campaign in Wisconsin, with growing criticism of his work on the pandemic and preference for former Vice President Joe Biden to handle it. Biden holds a slighter advantage in Michigan, with sizable leads among women, moderates and independents in ABC News/Washington Post polls in both states.

Biden leads Trump by 57-40% among likely voters in Wisconsin, a state that’s now reported to be third in the nation in per capita COVID-19 cases, with a 53% increase in average daily cases in the past two weeks, a record number of hospitalizations and a 112% jump in deaths. That compares with a closer 52-46% in mid-September.

In Michigan, it’s 51-44%, Biden-Trump, among likely voters, a slight Biden lead in this poll, produced for ABC by Langer Research Associates. The Senate race there stands at 52% for incumbent Democrat Gary Peters versus 46% for Republican John James, not a statistically significant difference, thus a rare chance this cycle for a GOP pickup, with control of the Senate in the balance.

Vote preference results look very much like views on Trump’s performance as president overall, seemingly cementing the contest as a referendum on the incumbent. In Wisconsin, registered voters disapprove rather than approve of his work in office, 58-41%. In Michigan, it’s 52-46%. Both nearly match vote preferences.

One wildcard is whether voting and vote-counting are aligned. The U.S. Supreme Court on Monday effectively barred the counting of mail-in ballots received in Wisconsin after Election Day, raising the question of how many late-arriving votes will be disqualified.