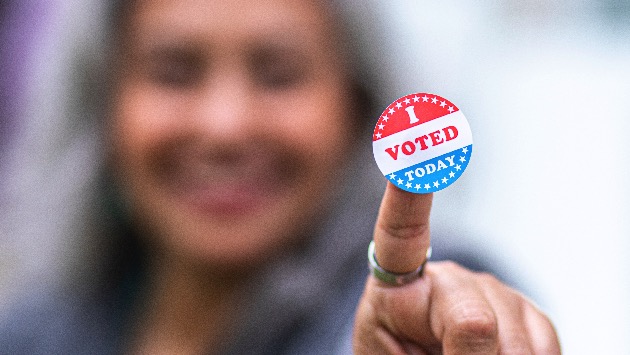 (WASHINGTON) — President Donald Trump, apparently believing the trajectory of the race has moved in his favor since the last debate, on Tuesday encouraged voters who may have already voted absentee to look into changing their votes.

“Strongly Trending (Google) since immediately after the second debate is CAN I CHANGE MY VOTE? This refers changing it to me. The answer in most states is YES. Go do it. Most important Election of your life!” he tweeted Tuesday morning.

On the campaign trail Monday in Pennsylvania, Trump mused about people wanting to change their vote, but this appears to be the first time this election he’s actually encouraged people to do so.

There was a spike in search interest on this topic Monday — but Trump’s claim that it was because of last Thursday’s debate is misleading because Google doesn’t specify what candidate people are searching around in terms of changing their vote.

Trump made this same pitch — about early voters switching their votes — in the final days of the 2016 election.

Can people actually change their votes? In at least some states, the is yes, under certain conditions.

In Michigan, state law allows for voters to “spoil” their ballots (essentially asking election officials to invalidate a ballot so a voter can get a new one). “Voters can vote absentee and then “spoil” their ballot to re-vote. Spoil ballot requests by voters who have already voted may request a new ballot by mail until 5 p.m. on the Friday before Election Day or can request a new ballot in-person until 10 a.m. on the Monday prior to the election. There is no option on Election Day to spoil an absentee ballot that has already been cast,” according to state law.

In Minnesota, voters are allowed to change their votes but on a tighter deadline, which has already passed.

Unlike other states above which allow for voters to change their minds after casting a ballot, in Pennsylvania a voter can only show up in-person on Election Day to vote after requesting a mail-in ballot if the voter has not returned the ballot.

In New York, the state elections board website outlines procedures for voters who have a change of heart.

“Even if you request or cast and return an absentee ballot, you may still go to the polls and vote in person. The Election Law recognizes that plans change. The Board of Elections is required to check the poll book before canvassing any absentee ballot. If the voter comes to the poll site, on Election Day or during early voting and votes in person, the absentee ballot is set aside and not counted,” the website says.

In Connecticut, a local town clerk’s office in Fairfield confirmed to ABC News that voters can request for their ballots to be rescinded and can be issued a new ballot if they change their mind. But this may vary by town.

In New Hampshire, the process is slightly more complicated. A voter can request a second ballot, and if there is enough time to do return it, the first ballot will be voided, according to the secretary of state’s office. A voter can also show up in-person on Election Day at their polling place, and is recommended to go in the first hour that polls are open before the absentee ballot processing begins, in order to void their first ballot. If their ballot has been marked as voted, they won’t be able to cast a new ballot, the office said.

And in a few other states, including Delaware, Idaho, Illinois, Indiana, New Mexico, some form of spoiling a mail ballot may happen, but not after a ballot is returned and processed — which is similar to Pennsylvania. Some of these states require voters to sign an affidavit.

In at least two states, it appears that voters can request multiple ballots if they make a mistake, but before they in fact cast the ballot.

In Arkansas, voters may “spoil” up to two ballots and receive another (three ballots total), but the secretary of state’s website adds, “once you drop your ballot in the ballot box, no changes can be made.” Voters may also be asked to sign a Spoiled Ballot Affidavit. To have it spoiled, voters can also take an absentee ballot packet to the county clerk’s office and cast a ballot in-person. “If they do not have the packet, they would have to vote a provisional ballot until the County Board of Election Commissioners can ascertain if the other ballot came back,” Chris Powell, press secretary for the Arkansas secretary of state, told ProPublica.

In Mississippi, the secretary of state’s county elections handbook reads, “a voter who mistakenly marks a paper ballot is entitled to receive a total of three (3 ballots. If a ballot is spoiled, write “Spoiled” across the face of the ballot and place it in the spoiled ballot envelope.”