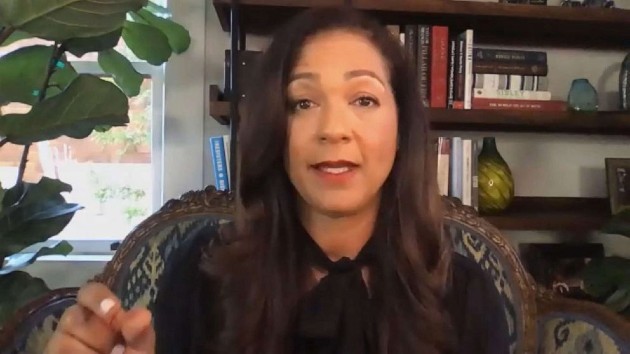 (NEW YORK) — Earlier this month, 600 women from 38 states sent out thousands of text messages to women of color living in key battleground states. Their message was simple: get out and vote.

Aimee Allison led the charge. She’s the founder of a group called She the People, which has launched what she says is the first national voter mobilization effort focused exclusively on women of color.

“I’m going to tell you something right now: Women of color can make this happen,” Allison told the women gathered in person and on Zoom from across the country.

“We have never had in electoral politics history in this country a strategic and targeted effort to reach women of color, and yet, women of color are the critical vote,” she told ABC News’ Nightline. “This is the moment.”

This demographic is the fastest growing voting bloc in the country. Allison believes that based on data from 2016, women of color could prove themselves pivotal in delivering Democrats a decisive victory.

While the history-making nomination of Kamala Harris generated excitement among many women of color, it’s actually the down ballot races that could impact who wins at the top of the ticket. It’s these races that Allison says “fuel the organizing.”

“It fuels the issues, the conversations with the community that drive higher turnout,” Allison said.

This year, a record 115 women of color are running for Congress. Dallas’ Candace Valenzuela is one of them.

“We run on behalf of our communities to lift them up,” Valenzuela, who is running for Texas’ 24th District, said. “Women of color have been doing this for years. It’s just time that they now have a seat at the table.”

If Valenzuela wins, she’d not only flip her district northwest of Dallas but she’d also become the first Afro-Latina to serve in Congress.

“When I moved out to the suburbs of Dallas, I was resigned to thinking that this was just going to be a red area and that we weren’t going to see a lot of other changes,” she said. “I was just trying to make a good life for my family.”

“I’ve believed this for a couple of years now, but I’ve never felt it more than I do in this moment,” she said.

The “Lone Star State” is an electoral gold mine with 38 electoral votes. If Biden pulls off a win here, Trump would have virtually no path to victory.

“This is a state with a quarter of the electorate being women of color who are the most likely Democrats with a vote eligible population that dwarfs the numbers that Trump won that state,” Allison said. “It’s a true battleground state.”

Her opponent, Beth van Duyne, is a former Trump administration official who calls herself part of a “conservative squad.” Most experts rate this race as a “toss up.” Some view the dueling campaigns as a battle to define the suburban vote.

“There is a huge misconception about the nature of folks in all of the suburbs, but particularly in Texas’s 24th District,” Valenzuela said. “This district is a completely suburban, majority person-of-color district. It is a very well-educated district.”

“I am a soccer mom. I am a suburban mother. I am a wife in the suburbs,” she said. “What I want for my children, for my family, for my community, is the safety and the prosperity that’s afforded within the American promise. And the color of my skin does not change that.”

Valenzuela grew up on the border in El Paso, Texas. Her Mexican American mother met her Black father in the Army. She said her childhood wasn’t always easy. At times, she and her family were homeless.

“We lived in a homeless shelter, on relatives’ couches and, at one point, me as a toddler and my brother as a baby ended up living in a kiddie pool outside of a gas station with my mom,” she said. “But we were able to get things together through some key programs.”

She said her family received housing through the U.S. Department of Housing and Urban Development, food stamps that helped put food on the table and that she went to public schools that “became a home for us.”

“But when I think about my dream — going to college, becoming an educator — there was so much hard work,” she said. “But there was also so much luck. And when you’re working hard, and you’re doing everything that you’re supposed to do, luck shouldn’t give you a stable life.”

After serving on the local school board for two years, she launched her congressional bid earlier this year, shortly after giving birth to her second son, who’s now a year old.

“[He] has essentially known nothing other than this congressional campaign in his entire life,” she said. “And so, like many working moms, I just tried to extract as much value as possible from the little bits of time I had with my kids or with my job.”

The mom of two — her other child is 5 years old — has shifted to a mostly virtual campaign because of the pandemic. As election day draws nearer, the thought that she could make history is not lost on her.

To young people of color, she said “the House of Congress is theirs” as well as “the halls of government.”

“All of these places, these rooms in which decisions occur, belong to everybody in this country who is seeking out the American dream,” she said. “I know that people may know this intellectually, but they don’t feel it viscerally, and I want them to know deep down that this is their country, too.”

More than seven million people have voted early in Texas. It’s a record-shattering number in a state that has traditionally had low turnout and has made it even more difficult to vote in the last four years.

This year, Texas is one of only five states not allowing the pandemic to be an acceptable reason to vote by mail-in ballot. The state’s governor, Republican Greg Abbott, also tried, unsuccessfully, to limit the number of dropoff boxes for absentee ballots.

“Women of color are right in the nexus of the most targeted folks for voter suppression,” Allison said. “In Texas, the early turnout numbers that are really crushing the 2016 numbers is remarkable. This is the way that democracy really is revitalized and gives me a lot of hope.”

Across Texas, at least 639,000 more women of color have voted at this point in the election compared to 2016, according to She the People.

“I’m also really excited to vote for my sorority sister Kamala Harris so I’m wearing my pearls so I’m getting ready to stroll to the poll,” she said.

Voter Swati Narayan told Nightline she didn’t expect to “feel this emotional about voting in this election but so much has changed in our country, especially these last four years.”

“As an African American woman, today is very special,” voter Yvonne Davis told Nightline on the day she voted. “Out of everything I think our foreparents have gone through, I’m determined to make my vote count.”

It’s that renewed energy from women of color who are voting that some groups are hoping to capture and carry forth in the week leading up to the election.

Veronica Torres and her Dallas-based group Hey Chica are cheering on Latina voters at the polls.

“When you celebrate someone, you’re acknowledging them,” Torres said. “It’s a way of saying, ‘Continue on.’ You want to feel good celebrating this… It’s acknowledging, it’s making memories and it’s actually encouraging you to do it again.”

Torres started Hey Chica to help connect and empower Latinas like herself. This year, she’s focused on registering and encouraging Latinas to vote, no matter who they plan to vote for.

“We invite women to be a part of something that’s bigger than just the vote,” she said. “It’s about the sisterhood … to stand up and have their voice be heard. It may not seem big; a movement starts from small.”

Allison hopes that the impact of women of color voters and candidates will persist far beyond Election Day.

“What we’re doing is we’re diffusing a centuries-old practice of prioritizing [the] white guy vote and interests over everybody else because we want an equal share of the society and we want to govern [and] 2020 is a year where so much of that is coming together,” she said. “We’re helping lead the country into a new era.”