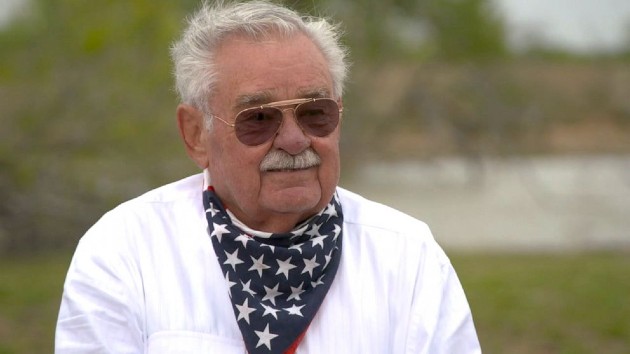 (NEW YORK) — Renato Ramirez is living the American dream along the United States-Mexico border, running the ranch his parents bought the year he was born eight decades ago.

“I’m an American of Mexican descent,” Ramirez told ABC News. “I’m proud of my race, proud of heritage, my ethnicity. I’m proud of what my family has done.”

His family made a successful living off the 4,000-acre ranch in Texas, and with that success, they provided for their children, he said.

Ramirez is now a millionaire, a vaquero and businessman. He’s one of 32 million Latinos eligible to vote — the country’s largest non-white electorate — in the upcoming election, according to a 2019 paper from Pew Research.

For his vote, he says “the bottom line is the economy.”

“I think that most of us have the same common goal, that we all want to educate our children,” he said. “We all want them to have a good economic life.”

He’s not alone. Eighty percent of Hispanic workers say the economy is their top priority in the 2020 election, followed closely by health care, according to Pew.

Castro, a Democrat, was the only Latino to run for president in 2020. His campaign ran on progressive policies, like “Medicare for All” and raising the federal minimum wage.

His presidential bid failed but those progressive policies proved popular with many Latino voters.

Progressive Latino voters helped Bernie Sanders win Nevada, Colorado and California and kept Sanders in the Democratic primary in Texas. Sanders came within just five points of beating Democratic nominee Joe Biden in Texas, winning 40% of the Latino vote, according to an exit poll by the Washington Post.

By the 2024 presidential election, the number of Latinos in Texas is expected to surpass the white population. They could make the difference between the state turning blue or staying red.

“We are a swing state,” Castro said. “You know, the last 10 to 12 polls showed the presidential race here basically tied. If we can win here, then it’s game over for the Republicans.”

“The Hispanic vote is going to be crucial,” Castro said. “It is a young population. It’s a growing population. But it’s one that is getting out, I think, in 2020 more than it did in 2016.”

In 2016, less than half of registered Latino voters showed up to the polls. This year, there’s a focused effort to mobilize this group.

Turnout among Latino voters is expected to increase by 15% in the upcoming election.

“The key to getting Latinos to the ballot box is a full-court press on voter registration,” Castro said.

Groups like Latino Justice are also working hard to reach Spanish-speaking voters. However, many voters are now faced with a new, formidable voting challenge: the pandemic.

“In our countries, voting by mail is not necessarily something that happens [in other elections],” Ricardo Negron, legal service coordinator for the organization, told ABC News. “While it may be a new system for some people, we want to make sure that people know down here in Florida, it has been happening for years. It’s not something that has been implemented because of COVID.”

It’s because of COVID-19 that long lines have formed for early voting, leading to a record-breaking voter turnout before Election Day, according to the United States Elections Project. Ramirez was one of these people who voted early.

He is among the nearly 30% of Latino voters who support Trump. Today, his family’s wealth extends into the millions. For that reason, Ramirez says a vote for Trump isn’t personal, it’s simply smart business.

For him, it matters less that Trump has said in the past that Mexican immigrants bring crime to the U.S. Ramirez says, “the thing is, he’s not a politician.”

“Those are kind of stupid remarks that he has made. It’s a very small portion of Mexico,” Ramirez said. “Most people want to work. Most Mexicans want to work.”

But what about the many Latinos who seek the success Ramirez has found but don’t have the leg up he received?

“I don’t know what to tell them. I just don’t know,” he said. “Develop commitment and develop a discipline. Work hard. That’s basically how I did it.”

Sema Hernandez, another Texas native, says voting for Trump was never an option as a Latina.

“He is actually detrimental to the Latino community,” she said. “They [sh]ould vote for their interests as a Latino, as a culture, as a people, instead of voting for their financial interests.”

Hernandez is a political activist and mother of four who ran for U.S. Senate in 2018 but lost in the Democratic primary against Beto O’Rourke.

“Before I started running for office, I was coaching little league baseball and breastfeeding my baby in the dugout,” she said.

She spent just $4,000 on her campaign, but garnered a good portion of the vote.

“I outperformed in places where most Democrats don’t perform very well,” she said.

She credits her success to appealing to Latinos as Americans. That was a winning strategy for President George W. Bush, who won 40% of the Latino vote in 2004, according to Pew.

In exactly one week, Biden, Trump and other local candidates across the country will also see if they were able to gain the crucial support of Latino communities.

Now you can own James Bond’s DB5 — the book, that is
Democratic drama as House advances Biden’s agenda: What’s in the draft reconciliation bill?
Andrew Garfield details the “amazing, beautiful way” he honored his late mother with musical film ‘Tick Tick… Boom!’
Frank Grillo on working with his production partner and “mad genius” Joe Carnahan on ‘COPSHOP’
After testifying on sexual abuse, Aly Raisman says she hopes ‘somebody listens to us’
‘﻿Blue Bayou’﻿ shines a light on this issue that many have “no clue” about