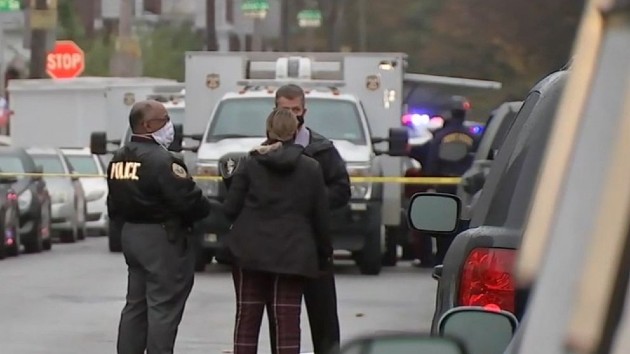 (PHILADELPHIA) — At least 30 police officers have been injured and 33 people have been arrested as protests continued overnight in Philadelphia over the shooting death of a Black man by police in West Philadelphia on Monday afternoon.

The Philadelphia Police Department confirmed that a 56-year-old female PPD sergeant was struck by a black pickup truck in the area of 52nd and Walnut streets at approximately 12:44 a.m. on Tuesday morning. She was subsequently transported to a local area hospital where she is currently in stable condition with a broken leg and other injuries.

In total, 29 other officers were treated and released for their injuries at various hospitals and the Philadelphia Police Department say that most of the injuries were the result of being struck by projectiles such as bricks, rocks and other assorted debris.

There have been at least 33 arrests overnight as well ranging on charges such as rioting, assault on police officers, looting and possession of firearms.

The mayor of Philadelphia says the shooting death on Monday afternoon “presents difficult questions that must be answered.”

The incident began when police responding to a radio call involving a person with a weapon encountered a man on a residential street brandishing a knife and waving it erratically, Philadelphia Police said.

Officers ordered the man to drop the knife, then fired at him after he followed them with the weapon, police said.

A video posted to social media appeared to show the man, later identified by officials as 27-year-old Walter Wallace, circling around a parked car and walking toward officers as they backed away from him, shouting, “Put the knife down!”

The officers were then seen firing several shots.

Police said an officer took Wallace to the hospital, where he died from his injuries.

A neighbor, Jada Hilton, said police could have done more.

“My prayers are with the family and friends of Walter Wallace,” Philadelphia Mayor Jim Kenney said in a statement. “I have watched the video of this tragic incident and it presents difficult questions that must be answered. I spoke tonight with Mr. Wallace’s family, and will continue to reach out to hear their concerns first-hand, and to answer their questions to the extent that I am able.”

“I look forward to a speedy and transparent resolution for the sake of Mr. Wallace, his family, the officers, and for Philadelphia,” he said.

“The Philadelphia District Attorney’s Office takes its obligation to try to be fair and to seek evenhanded justice seriously,” District Attorney Larry Krasner said in a separate statement. “We intend to go where the facts and law lead us and to do so carefully, without rushing to judgment and without bias of any kind.”

The officers involved in the incident have been placed on desk duty until the investigation is over, Gripp said.