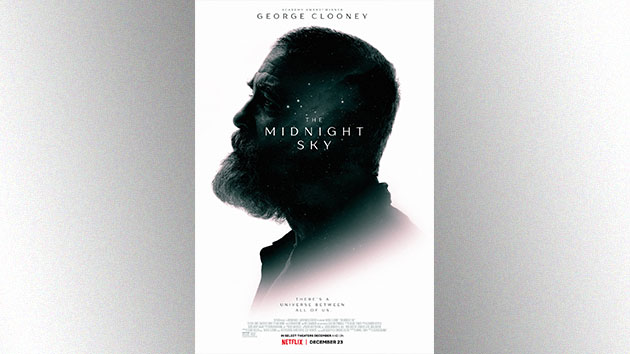 (LOS ANGELES) — George Clooney explores a post-apocalyptic world in the first trailer for his new film, The Midnight Sky.

Trapped in a remote location in the Arctic, Clooney’s character, a scientist named Augustine, makes continuous failed attempts to communicate with a space ship carrying a group of astronauts heading back toward Earth — which, Augustine is attempting to warn them, has been devastated in their absence by a catastrophic event.

Augustine believes himself to be the last human on earth until he meets a young girl named Iris.  The two venture into the frigid terrain in order to reach an antenna stronger than their own in a final attempt to warn the space travelers to turn away.

Clooney directs and stars in the film alongside a cast that includes Felicity Jones, Kyle Chandler, David Oyelowo, Tiffany Boone and Demián Bichir. The film is based on the book Good Morning, Midnight by Lily Brooks-Dalton.

“The sickness of hate and the elements that come from that, battles and wars — that has been percolating for quite some time,” Clooney tells Vanity Fair of the film. There’s the sadness [in the film] of what man is capable of doing to man and how easily it can just be taken away.  I wanted it to be about redemption in a way. I wanted there to be some hopefulness in a fairly bleak story about the end of mankind.”

The Midnight Sky debuts on Netflix on December 23 and will also screen in select theaters.

Black Friday 2020: Tips on the best deals to look out for
Michael Jordan donates $2M of proceeds from “The Last Dance” to food banks
Progressives worry about lobbying, corporate ties in Biden administration
George Floyd’s brothers on the fight for justice, remembering him on Thanksgiving
Heavy rain in the Northeast, critical fire danger in the Southwest
Trump-Biden transition live updates: ‘We’re all in this together,’ Biden says