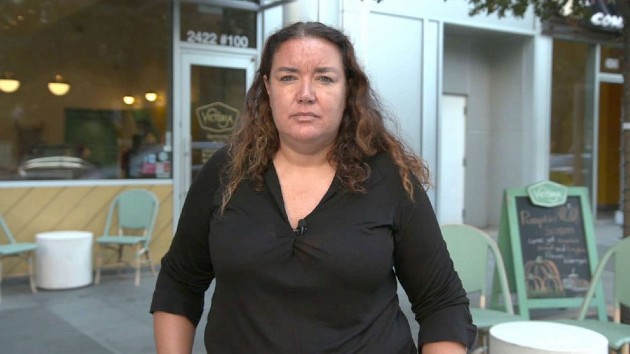 (NEW YORK) — Luciana Gomez has lived in the United States for 19 years. When she moved here from Argentina, she hadn’t planned to own a business, but she says living here “helped me discover the passion that I had.”

Gomez now owns Cafe Victoria in Dallas, which serves coffee and pastries. For the most part, it had been doing well, but then COVID-19 came. Gomez was one of thousands of small business owners who filed an application for the Payment Protection Program, the federally backed emergency loan program meant to help small businesses through the pandemic.

The program requires business owners apply for the loans through a local bank. But Gomez never received a PPP loan through the big bank she said she uses for her personal and cafe finances.

“I thought the process would be easier,” she said. “And it was to the point where I was kind of in tears because I would watch on TV that the money was almost gone.”

After dipping into her savings to stay afloat, Gomez said she was “at the point of desperation because I felt like I didn’t have the money to keep going” when a neighbor recommended going through the process at a smaller community bank. A week later, she had received a loan for $15,000.

The pandemic is one of the many hurdles Gomez has faced as an entrepreneur. Although she ultimately received a PPP loan, Latinos business owners overall only received PPP loans at half the rate as white people, according to a Stanford University report.

She said that in the beginning, owning a business was a difficult task to navigate, from a “financial perspective to taxes to hiring” staff.

“I think people don’t necessarily take you seriously when you have an accent,” she added.

Gomez said she’s already voted early for former Vice President Joe Biden. She said she votes not just for herself but for her community.

“I like his policies,” she said. “I just feel like I will be better represented. But again, it’s not just about me or my business. My decision this year has to do with [the] bigger picture of the country and where this country is going.”

“You cannot think about a good economy without taking Latinos into account,” she said.

The total economic output of Latinos in the U.S. was $2.6 trillion in 2018, according to the nonprofit Latino Donor Collaborative, which aims to reshape the perception of Latinos as part of the American social mainstream.

Yet, despite their impact on the economy, many of the five million Latino business owners in the U.S. struggle to see them grow. Mark Madrid, CEO of the Latino Business Action Network, says it’s because many don’t have the resources to find investors for their businesses.

Only 3% of Latino-owned businesses earn at least $1 million in annual gross revenue, according to another Stanford report. Ryan Bethencourt, a Cuban American, is one of the few Latinos who’s managed to see his business grow to a valuation of several million dollars.

Bethencourt appeared on Shark Tank in 2019 with hopes of winning a deal from one of the show’s investors to bolster his plant-based dog food company, Wild Earth. Investor Mark Cuban, owner of the NBA’s Dallas Mavericks, injected $550,000 into the company for a 10% stake, and the company has been growing ever since.

His company’s success is a testament to how far his family has come since arriving in the U.S. as Cuban refugees. His mother and father, he said, settled in Miami and became entrepreneurs as well, opening a plumbing business.

Like so many other American families, Bethencourt’s is diverse, and everybody has a different view on the presidential election.

“I think that my own family encompasses a lot of what we see across America, from my aunts who support [President] Donald Trump through to my mother who actually supports Biden, and it’s definitely been one of the bigger challenges navigating that,” he said. “I mean, we all love each other. We all care deeply about each other. But sometimes some of the divisions are pretty strong.”

For his part, Bethencourt plans to vote for Biden in the general election. He says it’s because his personal values translate into his politics.

“What’s really driving my decision are the things that I care deeply about, which is about science, climate change and sustainability and caring about people and our pets,” he said.

Meanwhile, Jorge Rivas, owner of Sammy’s Mexican Grill in Tuscon, Arizona, says he’ll be voting for Trump in this election.

Rivas, a vocal supporter of Trump, and his wife, Betty Rivas, faced social media backlash for appearing in the VIP section at a Trump rally in Phoenix earlier this year.

“One of the reasons that I want to vote for President Trump is that he believes in law and order,” Jorge Rivas said. “For someone like myself, who came from El Salvador, [a] very violent country … law and order is very important to me.”

Rivas said he voted for Barack Obama in 2008 but that the Democratic Party slowly moved in a direction he couldn’t follow.

“The only choice that we have is to vote Republican because they align more with our moral values and the person that we are,” he said.

In spite of the critics, Rivas says he’s proud of the life he’s built in the U.S., having come to the U.S. with Betty Rivas at an early age and not being able to speak much English.

It’s that work-hard mentality that leads some Latinos to the American Dream, and it’s also one that sustains our economy.

“I think the immigrant mentality is to go and build something,” Gomez said. “It takes a lot of work for us to be here, and when we’re here, we want to leave our mark. And a lot of times, that happens through small business.”

Black Friday 2020: Tips on the best deals to look out for
George Floyd’s brothers on the fight for justice, remembering him on Thanksgiving
Shop Small Saturday: support our local businesses during a difficult year
How to help food banks this Thanksgiving as COVID-19 deepens demand
Anticipating a vaccine, supply chain preps for challenges ahead
Denver mayor offers apology for Thanksgiving travel after urging residents to stay home